Pretty Twisted by Gina Blaxill, published by Macmillan Children's Books on 6th May 2011

Goodreads synopsis:
Ros has a secret crush on Jonathan. Jonathan is massively hung up on Freya (even after she dumps him). And Freya? Well, Freya is a beautiful enigma. Even more so when she goes missing without a trace..."Pretty Twisted" is narrated in alternating chapters by Jonathan and Ros who meet online at a time when things are going sour for Jonathan. His stunning girlfriend, Freya, is away at college and they are growing apart - consequently, he is struggling with his own sense of identity. Ros is also experiencing some problems - one of her friends is dating an older man whose strange behaviour gives Ros cause for concern. Meanwhile, the local news has been reporting some kidnappings of teenage girls. So when Freya dumps Jonathan, then seems to disappear off the face of the earth, he enlists Ros' help in tracking down the girl he still loves. 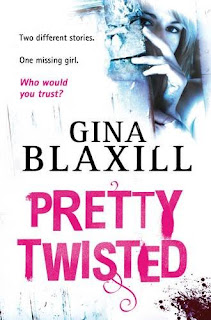 Review:
'Pretty Twisted' is not normally the sort of book that I'd pick up and read.  It's a modern, contemporary thriller narrated by two teenagers who seem to get themselves into an awful lot of trouble!  The storyline is scarily realistic and as the story progresses, you believe completely that the events of the book could actually happen in real life and indeed often do.  I was intrigued to read this one when I found out that this was the debut young adult offering by British author Gina Blaxill, who is actually only 24 herself.

The plot twists and turns and the motives of the characters are never certain until the end of the book.  This adds to the sense of suspense and danger which is felt throughout.  I was never quite sure who could be trusted as they all seemed to have so many hidden secrets.

The story centres around fourteen year old Ros and sixteen year old Jonathan, who first meet online.  I have to say that I found some of the 'chat speak' difficult to read.  Although these sections are reminiscent of how teenagers communicate with each other online, I did find these bits often spoilt the flow of the story and seemed a little clumsy.  The two characters start to reveal things about themselves which they probably would never be able to do in real life and although they've never met they become closer and closer, to the point that Ros fantasises about Jonathan becoming her real life boyfriend.  The two finally meet when Jonathan's girlfriend Freya goes missing and Ros agrees to help him try and track her down.  I liked the fact that there is nothing sinister about their online relationship at all.  Although Ros is first worried about meeting him, believing that he might not be a teenage boy after all, their friendship develops into something real and they do end up genuinely liking each other.  Although the book definitely warns about the dangers of meeting people who you chat to on the Internet, it also shows that you can make friends this way too.

One of the things I liked most about this book was the fact that the writing and the events of the story are so realistic and believable.  Gina Blaxill is a really fresh and modern teen voice and she has definitely tried to capture the feelings, emotions and experiences of young people in a way that the reader can really connect with.  She's obviously researched her characters well and it shows.

If I'm honest, the plot didn't completely win me over, although I joined the unexpected twist at the end but normally I enjoy a generous helping of fantasy which for obvious reasons this book didn't have, so it did take me a little while to really become engaged with the story.  Saying that, I'm still looking forward to seeing what Gina Blaxill has up her sleeves next!
Posted by Samantha (A Dream of Books) at 07:37