Review: The Girl Who Leapt Through Time - Yasutaka Tsutsui

The Girl Who Leapt Through Time by Yasutaka Tsutsui, published by Alma Books on 9th May 2011

Goodreads synopsis:
One of Tsutsui's best-known and most popular works in his native Japan, The Girl Who Leapt through Time is the story of fifteen-year-old schoolgirl Kazuko, who accidentally discovers that she can leap back and forth in time. In her quest to uncover the identity of the mysterious figure that she believes to be responsible for her paranormal abilities, she'll constantly have to push the boundaries of space and time, and challenge the notions of dream and reality. 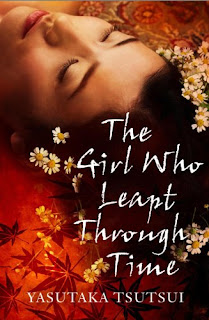 Review:
This book was originally published in Tsutsui's native Japan and is his fifth work to be translated into English.  This slim volume contains two stories, 'The Girl Who Leapt Through Time' and 'The Stuff That Nightmares Are Made Of'.

When I was initially offered this book to review I wasn't sure whether to accept as it didn't sound like the sort of thing I normally read.  However, I love giving new authors a try and the very pretty cover did grab my interest, so I thought I'd give it a try.  I have to say that on finishing it, I wasn't really sure what to make of the book.  I'm not a big fan of short stories which this volume seemed to be, as I find them too brief and insubstantial.  Plus often just as your interest is piqued they finish and you're left feeling wholly unsatisfied.

'The Girl That Leapt Through Time' is about a young girl called Kazuko who discovers that she can leap and teleport herself through time, following an accident in her school science lab.  With her new-found abilities she is able to help her friends when they need it but is determined to find the shadowy figure who she believes is responsible for her time-travelling powers.

The premise of the story was interesting enough but on the whole I just didn't find that the story went anywhere.  Not enough time was spent on developing the characters fully which meant that I couldn't engage completely with them and I didn't care enough about what was happening to them.  At times I also found that the narrative was a little stilted but that may have been due to the language being transcribed from its original form and some of the nuances and meanings being lost.

There are some deeper issues underlining the very simple story, such as warnings about the future and the outcome of scientific advancements, however I found the general storyline puzzling and struggled to remain interested about what was actually happening throughout .

The second story in the book is called 'The Stuff That Nightmares Are Made Of' is about another young girl called Masako who tries to confront her fears, at the same time as helping her little brother who's scared of strange things he sees at night.  Yet again I found this one a strange and although I liked the general message of overcoming your fear by facing it head on and therefore being able to overcome it, I would have liked the story to have been developed a bit further.  Saying that, I did prefer it out of the two stories contained within this volume, so I'd even go so far as to say read this one first and give it a go.
Posted by Samantha (A Dream of Books) at 00:00