Embrace by Jessica Shervington
Published by Orchard on 6th October 2011 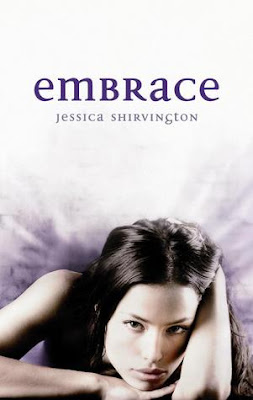 Violet Eden is dreading her seventeenth birthday dinner. After all, it’s hard to get too excited about the day that marks the anniversary of your mother’s death. The one bright spot is that Lincoln will be there. Sexy, mature and aloof, he is Violet’s idea of perfection. But why does he seem so reluctant to be anything more than a friend?

After he gives her the world’s most incredible kiss – and then abandons her on her front doorstep – Violet is determined to get some answers. But nothing could have prepared her for Lincoln’s explanation: he is Grigori – part angel and part human – and Violet is his eternal partner.

Without warning, Violet’s world is turned upside down. She never believed in God, let alone angels. But there’s no denying the strange changes in her body ... and her feelings for Lincoln. Suddenly, she can’t stand to be around him. Luckily, Phoenix, an exiled angel, has come into her life. He’s intense and enigmatic, but at least he never lied to her.

As Violet gets caught up in an ancient battle between dark and light, she must choose her path. The wrong choice could cost not only her life, but her eternity...
I only heard about this book recently but as soon as I read the description I knew I had to read it.  A strong heroine, a killer romance and angels!  What more could you want!  I've actually posted the Australian cover as it hasn't been released here in the UK yet but I will be showcasing the UK cover art as soon as it's revealed.
Posted by Samantha (A Dream of Books) at 00:00