Bringing the Summer by Julia Green, published by Bloomsbury on 10th May 2012

Goodreads synopsis:
It’s the lazy end of summer and Freya is about to start her A levels. Her brother Joe died a year ago, but she is slowly coming to terms with his death. She is beginning to feel ready for something new – a change. And then a railway accident brings her into contact with the gorgeous Gabe. Freya is drawn not just to his blond good looks, but everything about him, including his large, shambolic, warm and loving family, which seems to Freya so different from her own.

And then Gabe’s clearly troubled older brother makes it clear he is interested in Freya – and Freya has some decisions to make about what she really wants. 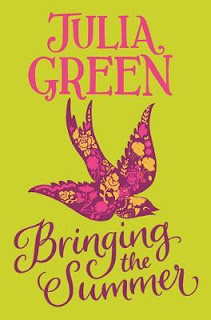 Review:
I haven't read anything by Julia Green before but although this is the first of her books I've tried it certainly won't be the last.  'Bringing the Summer' features the character of Freya who first appeared in Green's earlier novel 'Breathing Underwater'.  Freya is now sixteen and with her parents is trying to move on with life after her brother's death.

An unexpected and shocking event at the very start of the book connects all the events which follow, leading to Freya meeting Gabes and through him his wonderfully big, lively and welcoming family at Home Farm.  She immediately feels welcomed into the fold and Gabe's family life is presented as a huge contrast to her own home which feels empty and lonely without her brother Joe.  She is having to adjust and adapt to now being an only child with parents who seem to be living their own lives without her.

I really enjoyed Julia Green's writing style in this book.  Images are painted so vividly that scenes, settings and characters just leapt off the page.  I could imagine perfectly Gabe's bustling family with it's matriarch Maddie at the helm and assorted brothers and sisters always present.  It was very easy to see what attracted Freya to them so much.  I have to admit though that I wasn't a big fan of Gabe's older brother Theo who enters the picture part way through the story.  He's rather enigmatic and mysterious at times but yet again however he presented another contrast, the dark to Gabe's light and sunny personality.

Freya is a fabulous heroine because she's so positive in her outlook to life.  Things do get her down sometimes which is only normal and to be expected but she's a naturally upbeat person and wants to experience everything life has to offer.  I loved this short quote from her Grandfather when she tells him this, "If you want to see a lot, standing still in one place is a good way to do it".

I initially thought that this was going to be quite a light read but I soon found that the story dealt with much deeper issues.  Much of the book is about how people deal differently with influential and pivotal events in their lives and how they cope in the aftermath of a bereavement.

In Julia Green I've found a new British author who I only wish I'd discovered before.  Her writing is a real treat and I'm excited to get hold of her previous works now.