Welcome, Caller, This is Chloe by Shelley Coriell, published by Amulet Books on 1st May 2012

Goodreads synopsis:
Big-hearted Chloe Camden is the queen of her universe until her best friend shreds her reputation and her school counselor axes her junior independent study project. Chloe is forced to take on a meaningful project in order to pass, and so she joins her school’s struggling radio station, where the other students don’t find her too queenly. Ostracized by her former BFs and struggling with her beloved Grams’s mental deterioration, lonely Chloe ends up hosting a call-in show that gets the station much-needed publicity and, in the end, trouble. She also befriends radio techie and loner Duncan Moore, a quiet soul with a romantic heart. On and off the air, Chloe faces her loneliness and helps others find the fun and joy in everyday life. 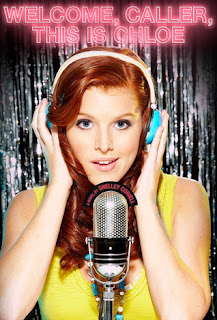 Review:
This is Shelley Coriell's debut novel and was an enjoyable and upbeat read.

At the start of the story, fun loving heroine Chloe, who has a penchant for vintage shoes, finds herself cold-shouldered by her two best friends.  Ignored by everyone at school, she becomes involved with the school radio station and a whole new era of Queen Chloe is born.

The book started off quite slowly for my tastes and in the beginning I didn't feel hugely invested in the characters or the story.  However, as Chloe begins to spread her wings at the radio station and makes friends with Clementine, Duncan and co, I saw a new depth to her character which I liked.  She initially came across as a little shallow but soon proved that there was more to her than cute shoes and a bubbly personality.

Chloe is a really positive and upbeat person.  I admired the way that even in tough situations she always tries to look on the bright side of things.  Being ditched by your best friends must be terrible as she ends up completely isolated but new beginnings are around the corner for her.  I enjoyed her quirky radio station broadcasts too which were very amusing.

I loved the close relationship she has with her Gran who's suffering from Parkinson's Disease.  Grandparents don't often figure prominently in young-adult literature so it was nice to see the two of them sharing such a close bond and actually taking the time to do things with each other.  It was obvious that her Gran had been like a second mother to her and it was interesting to see the relationship reversed with Chloe having to look after her Gran.

There's romance on the cards for her too in the shape of the enigmatic Duncan who's hiding a big secret, but I felt that the story was mainly about Chloe herself and her personal growth.  There's also a positive message in the book about letting people into your life and finding your own place in the world.