The Vampire of Highgate by Asa Bailey, published by Hodder Children's Books on 7th June 2012

Goodreads synopsis:
Kathy Bilic is adopted. Until now, she's had only a vague memory of her real family. But terrifying dreams and visions of her sister Amber are waking her in the night. When Amber starts giving her messages, Kathy gets a sickening sense that her sister is in danger - from a deadly, inhuman source. Kathy hits London to find her sister - but when she arrives at her aunt's house in Highgate, she is actively dissuaded from pursuing the mystery. Undeterred, Kathy's trail leads her through a bloody murder in the British Museum to a charged meeting with the mysterious, hypnoptic Antwain and a final confronation with her sinister father. Before long, Kathy uncovers the full horror of her heritage and her sister's fate at the hands of the Vampire of Highgate. 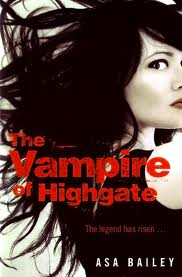 Show Less
Review:
When I read that this book was based on the real life story of the Highgate Vampire I was immediately interested in reading it.  Although Asa Bailey has built on original elements of the story, he's also crafted something new.

Kathy arrives in London from America, hunting for her sister Amber who has gone missing.  She gets more than she bargained for when she finds out about the legend of the Highgate Vampire and discovers a secret about her own family history which has enormous repercussions.

Set in London, near Highgate Cemetery, this was the perfect backdrop for the story.  Creepy and spooky, I got cold shivers whenever they entered the Cemetery, as it seemed that danger was lurking around every corner.  It was also nice to see a British setting for a change as the majority of the book takes place on this side of the ocean.

Having read a lot of vampire books, I didn't feel that this title offered anything particularly original within the genre, although these were definitely not friendly vampires...you would want to avoid them at all costs!  The mythology was interesting but I never properly connected with the main character Kathy and I thought there wasn't enough character development to sufficiently draw me to her.

The time frames jumped forwards and backwards a lot, which I found quite confusing at times.  Although I understand this was designed to fill the reader in on the history of the Highgate Vampire, I thought there were a few too many jumps which interrupted the overall flow of the story.

Dark and dangerous, this is a book where anyone's life can be placed in danger and where you are never sure which of the cast of characters will survive until the end.  Although it wasn't for me, fans of the genre may like to give it a try.
Posted by Samantha (A Dream of Books) at 00:00