Goodreads synopsis:
Being told you're dead is one thing. But having to solve your own murder? It's a lot for a girl to take in. Solving the mystery behind your death can be murder.

Charlotte wakes up at Hotel Atessa, home to murdered New York teenagers and HQ of The Dead Girls Detective Agency. Before she has time to adjust to her new, erm, dead self, she's thrust into the arms of her new afterlife companions, Lorna, Nancy and the cute - if slightly hostile - dead boy, Eddison.

But where does this leave Charlotte and her boyfriend David? Is it possible to have a long-distance relationship from beyond the grave? The only way out of this limbo is to figure out who killed her, or she'll have to spend eternity here. But who could hate her enough to want her dead? 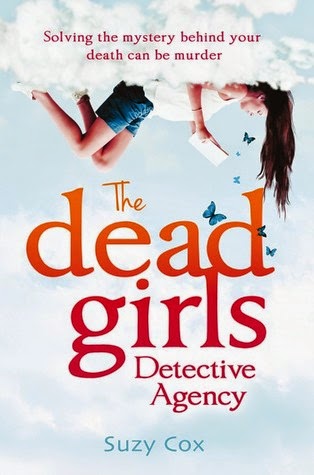 Review:
This is the first book in a new series about a group of murdered teenagers solving their own deaths so that they can move onto the afterlife.  It's an interesting concept and one which appealed to the part of me that loves detective shows and books, as I'm always trying to puzzle out who did the crime.

The main character Charlotte, is the newest member of The Dead Girls Detective Agency.  After waking up to discover that she's dead and that life as she knew it is over, she and her new companions set about attempting to work out who wanted her out of the way enough to commit murder.  Charlotte and the other girls are an interesting bunch.  There's Lorna, the wonderfully geeky Nancy and the mysterious Eddison.  They are all dead but help Charlotte to unravel the clues which they gradually begin to uncover.

I adored the New York setting of this book.  It's a place that I've always wanted to visit and there were some fantastic scenes set all around the Big Apple.  One of my favourites was when they were at the top of the Empire State Building.

The concept for the story is not particularly original but I thought that it was carried out adeptly and with humour.  There are some great lighter moments of comedy in the story as Charlotte learns to adapt to her new existence, experiencing just a few hiccups along the way.

I enjoyed following all the clues and trying to puzzle out who was involved but I have to say that you will be very surprised when Charlotte's killer is revealed.  I know I was.

The second book in the series 'Dead Girls Walking' is out now and centres around the character of Lorna.  Who knows what surprises lie in wait for her!