The Forever Song by Julie Kagawa, published by Mira Ink on 2nd May 2014

Goodreads synopsis:
Allie will embrace her cold vampire side to hunt down and end Sarren, the psychopathic vampire who murdered Zeke. But the trail is bloody and long, and Sarren has left many surprises for Allie and her companions - her creator Kanin, and her blood brother, Jackal. The trail is leading straight to the one place they must protect at any cost - the last vampire-free zone on Earth, Eden. And Sarren has one final, brutal shock in store for Allie.

In a ruined world where no life is sacred and former allies can turn on you in one heartbeat, Allie will face her darkest days. And if she succeeds, her triumph will be short-lived in the face of surviving forever alone. 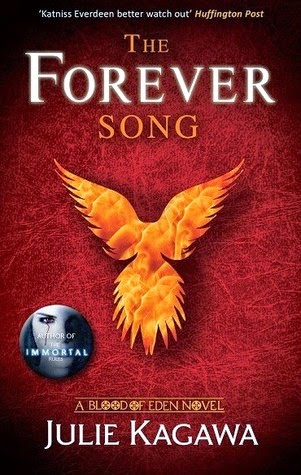 Review:
This is probably THE vampire series I've enjoyed the most in the last couple of years.  I love Julie Kagawa's writing and the characters she has created.  There is a real grittiness to the series and it has kept me engrossed throughout all three books in the trilogy, with some genuine shocks and surprises along the way.  I was so excited to start reading 'The Forever Song' which was absolutely absorbing.  I was relieved that I started it on a Saturday morning because it meant that I could curl up for a long, uninterrupted reading session.

The whole series has culminated in Allie's determination to kill Sarren and stop him once and for all.  She won't allow him to infect and kill the people of Eden - the last safe zone on earth, and she wants to make him pay for robbing her of the person she loved the most.  Without Zeke by her side she struggles to overcome the monster living within her but she has incredible strength and won't give in without a fight.

Not only do I love the character of Allie but Jackal remains a big favourite of mine too.  He has really undergone an almost 360 degree personality change from the start of the series and has developed a new found compassion for others.  He is however still the sarcastic, wise-cracking Jackal that I've come to know and love.  He is very much an anti-hero and definitely gets all of the best lines!  Kanin is another brilliant character and always tried to show Allie and Jackal the right path, whilst giving them the freedom to make their own choices and mistakes.

There are some massive surprises throughout the book and I felt like I was continually kept on my toes by Julie Kagawa's ingenious plotting.  She threw me for a loop on more than one occasion which was one of the key elements I enjoyed about the story.  This was such an exciting and well written conclusion to the Blood of Eden trilogy.  The final ending was absolutely perfect and the best way to finish what has been such a stellar series.