Goodreads synopsis:
Cass Daniels isn’t waiting for her knight in shining armor. She knows that girls like her don’t get a happily ever after. Not if you live in a trailer with your mom, work at a greasy spoon diner, and get leered at by old men. Maybe that’s why she puts up with Jackson—her poor excuse for a boyfriend, who treats her like dirt. Cass has learned to accept her lot in life. That is, until he walks into her diner...

His name is Tucker White, and he’s different from any man Cass has ever known. Tall, tattooed, and bad-ass gorgeous, he’s the lead singer of the rock band Damaged. From the moment they meet, Tucker sees something in Cass he just can’t shake. Something beautiful. Something haunted. Something special. And he’s determined to find out what it is—if only he can get her to open up and let him in... 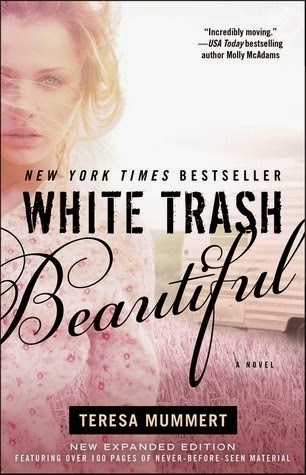 Review:
'White Trash Beautiful' is a gorgeous book which really tugged at my heartstrings.  I found it very moving and emotional and I got quite weepy in places.  It's best read with a big box of tissues beside you.

The story revolves around the main character Cass who is desperate to turn her life around.  She scrimps and saves but fears that with a drug addict boyfriend and a dependant mother, she will never be able to escape her dead end job in a small town diner and her trailer park home.  Things are bleak for Cass until Tucker waltzes into her life and brings with him hopes and dreams for the future that she had never dared imagine.  I really felt sorry for Cass.  She tries to keep things together and tries to do the right thing but her life is so awful and she feels a misplaced sense of gratitude towards her boyfriend Jackson which means that she doesn't kick him to the curb like I thought she should have.  It's Cass that keeps things afloat for the people in her life but she can't help but dream of something more.

I loved Tucker and I was rooting for him and Cass from the start.  He truly is like a knight in shining armour to her and I appreciated the fact that he was defensive of her right from the start of their relationship.  Their romance is gradual but like a fairy tale to Cass and provides her with the escape from reality that she needs.  I wish she could have believed in herself a little more though as at times she seemed far too hard on herself and didn't think that she deserved any more than she already had.

This is my first Teresa Mummert book and I was very pleasantly surprised by how much I enjoyed it. 'White Trash Beautiful' is a gritty, realistic romance which features characters who have to fight against the odds to be together but who you'll be desperate to see together.  I am so happy that this is only the first book in a trilogy about Cass and Tucker because I want to see much more of them and I'll be keeping my fingers crossed that they get the happy ever after that they both deserve.
Posted by Samantha (A Dream of Books) at 00:00