Today I'm taking part in the blog tour for Colleen Hoover's new book 'Ugly Love'.  Read on to see what I thought of the book. 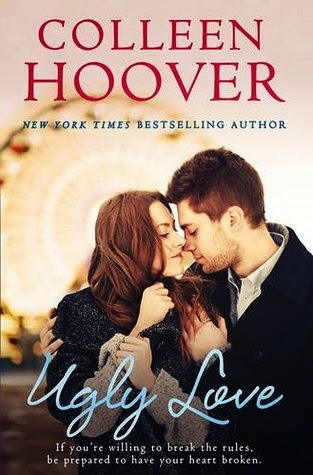 When Tate Collins finds airline pilot Miles Archer passed out in front of her apartment door, it is definitely not love at first sight. In fact, they wouldn't even consider themselves friends. But what they do have is an undeniable mutual attraction.

He doesn't want love and she doesn't have time for a relationship, but their chemistry cannot be ignored. Once their desires are out in the open, they realise they have the perfect set-up, as long as Tate can stick to two rules - never ask about the past and don't expect a future.

Tate convinces herself she's ok with it, but soon realises that it's harder than she thought. Will she be able to say no to her sexy pilot when he lives just next door?
Review:
If you are looking for a gutsy, heart-wrenching read which packs a real emotional punch then look no further than Colleen Hoover's new novel 'Ugly Love'. Be prepared to have your emotions tossed all over the place as you chart the course of Tate and Miles's turbulent relationship. If anyone knows how to get my insides all knotted up then it's Colleen Hoover.  I'm always prepared with a box of tissues to hand because I usually know that I'm going to be crying by the end of the book and 'Ugly Love' was no exception.
The story follows Tate Collins and Miles Archer who first meet when Tate finds Miles slumped outside of her apartment door.  The book splits into two narratives which alternate throughout.  The present day shows the two's burgeoning relationship and the past explores what happened six years ago when Miles was still living at home with his father.  I thought this narrative device worked really well in helping to explain why Miles has become the way he is and I was glued to both storylines.
Miles and Tate's relationship is based purely on sex.  Miles tells Tate that he doesn't want love or a relationship based on anything other than the physical.  She thinks she can cope with this until she begins to fall for him and fall hard but can she discover what is stopping him from opening up to her and letting his heart feel again?
The whole way through I was half-afraid of discovering what Miles's secret heartbreak was because I just knew that it was going to be something truly terrible.  At the same time, I was desperate to know although I did have my suspicions along the way about what it might be.  Colleen Hoover definitely doesn't hold back from taking the reader right to the brink of despair only to show us some hope at the end of the road.  I was in tatters by the end and completely blown away by the story and the depth of the characters' emotions.
'Ugly Love' is an incredible book by an amazing author which will take you on an emotional rollercoaster of a ride.
Posted by Samantha (A Dream of Books) at 02:36