As Red As Blood by Salla Simukka, published by Hot Keys Books on 7th August 2014

Goodreads synopsis:
Seventeen-year-old Lumikki Andersson is hardly your average teenager. She lives by herself in the city of Tampere, Finland, and has a firm rule to mind nobody's business but her own. But that rule is put to the test when she happens upon five hundred washed euro notes hanging up to dry in her school's darkroom, and it is shattered once Lumikki realises who owns them.

Caught in an increasingly tangled web of deception, corruption and danger, Lumikki finds herself navigating the Tampere's dark underbelly in the search to expose its shocking connection to the international drugs trade. Lumikki is smart, but is she smarter than a master criminal? Can she bring down the infamous 'Polar Bear' - or will she become another one of his victims? 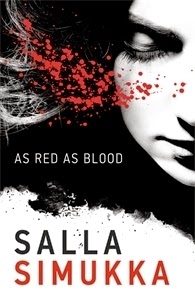 Review:
'As Red As Blood' is translated from the original Finnish by Owen F. Witesman and is the first book in a brand new thriller series by Salla Simukka.  It is a dark and sinister read which really impressed me and which I will be highly recommending.

The main character, teenager Lukikki Andersson, reminded me of female heroine Lisbeth Salander, from the books by Stieg Larsson.  She is a loner and is extremely independent, living on her own away from her parents.  She is very resourceful and clever but is also hiding secrets about her past which I was definitely intrigued to know more about.  We are given glimpses of a relationship she was previously involved in but nothing is explicitly revealed and you are left to make your own deductions about this.

The story really kicks into gear when Lukikki unexpectedly stumbles across dirty money hanging in her school darkroom.  From this moment on, she becomes embroiled in a dangerous criminal underworld where murder and deception dog her every step.  I loved the narrative and I was drawn in by the extremely puzzling plot which had me utterly gripped.  I couldn't put it down for even a second and finished this title in one sitting.  It's not a particularly long book but every chapter is brilliantly written, combining intrigue, deceit, danger and fear.

An enticing blend of crime thriller and mystery, this was a fantastic read which unravelled gradually revealing hidden secrets but which still left me with plenty of questions which will hopefully be answered in the next book in the series.  I was swept away by the fantastic plot and the kick-ass heroine and I can't wait to read more by this very talented author.