Misbehaving by Abbi Glines, published by Simon and Schuster on 17th July 2014

Goodreads synopsis:
Jason is sick of living in his rock star brother’s shadow. So when he ships off to Sea Breeze, Alabama, he’s looking for a much deserved escape and a chance to blow off some envious steam. Falling for the local bad girl was definitely not the plan. But as the new duo enjoys some naughty fun in the Alabama sun, Jason learns that even though Jax is the musician in the family, he’s not the only brother who can rock someone’s world. 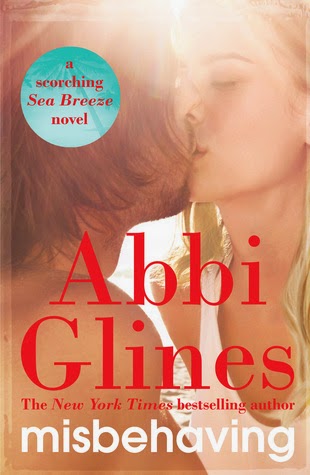 Review:
I absolutely adore the new look to the Sea Breeze series.  I think the covers are much more fitting to the stories than the previous black ones and look so, so pretty on my shelves!

'Misbehaving' is the latest book in the series and for the first time in an Abbi Glines story, features a bad girl main character.  Jess is a small town girl who lives with her stripper mother.  She is far from an innocent virgin and knows how to use her obvious charms to get her own way.  Although I don't often like bad girls and it took me much longer to warm to Jess than previous characters such as Willow and Amanda Hardy, I'm still glad that Abbi took a chance and went for it.  She managed to give Jess lots of interesting layers and showed that beneath her tough exterior she is as hopeful for love as everyone else.

Jess is knocked off her feet when handsome Jason Stone, brother of Jax, appears in her life.  It just goes to show that even bad girls sometimes need a white knight and Jason is it for her.  He has to work hard to prove himself to her but as she begins to open up to him, he finds that she is vulnerable and insecure, as well as loving and selfless.  The latter qualities are particularly shown through her relationship with her mother.  The two are best friends as well as mother and daughter and it is obvious that they would support each other through thick and thin.

It was great getting to see Jax Stone's little brother get his own story at last!  Who knew that Jason would grow up to be quite so gorgeous and chivalrous.  I also loved seeing glimpses of all the other characters that make up the Sea Breeze community and it made me smile that they all seem to be growing up and settling down with their own children now.

In my opinion, Abbi Glines never puts a foot wrong and 'Misbehaving' is yet another fabulous instalment in one of my all-time favourite series.