Goodreads synopsis:
As part of his prize for winning the All-UK Knitting Championships, seventeen-year-old Ben Fletcher has won himself an all-expenses paid trip to New York... and to the US National KnitFair. Unfortunately his new girlfriend Megan is (somewhat suspiciously) unable to come with him, which means Ben has the dubious pleasure of being accompanied by his family and his third-choice-friend Gex.

The other problem is, Ben's not really sure he wants to be known as teenage knitting genius any more. His idea for a knit-able hoodie could make him millions... or turn him into a laughing stock forever. An existential knitting crisis turns out to be the least of Ben's concerns though, as he quickly finds that his apparent magnetism for trouble has followed him across the pond. 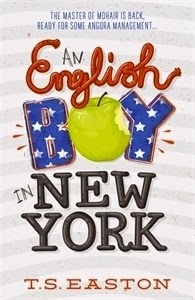 Review:
Champion knitter Ben is back and off to New York to claim his prize of an all-expenses paid trip to the US National KnitFair.  I loved the first book about Ben which was funny, humorous and warm-hearted, so I couldn't wait to get stuck into the sequel.

Ben's a natural worrier so his anxiety comes to the fore when he has to decide who to take with him on the trip when his girlfriend Megan can't go.  It's quite hilarious watching Ben trying to puzzle out who to ask as his list of possible travel partners keeps on getting smaller and smaller.  He eventually ends up rather reluctantly asking Gex who jumps at the chance, although he has zero interest in knitting.  His Mum and Dad are also there to accompany him on the trip and although they are pretty embarrassing, pretending that they are on their second honeymoon, I found them really funny.

The New York setting was one of my favourite things about the book.  The Big Apple is my top dream holiday destination and until I get there (I will one day!) I like to live vicariously through others.  It was great getting to see Ben explore some of the sights and sounds of the city and he gave me a lot of laughs with his obsession about eating the way that New Yorkers do.  I'll admit that I would do the same if I ever got the opportunity to go!

Ben's passion for knitting is another aspect which makes these books so enjoyable.  His love for all things knit and purl shines out from every page and he makes me want to pick my knitting needles up and join him.  He has an interesting challenge to face in the story which I won't spoil but needless to say, it involves Ben having got himself into a rather tricky and very humorous situation.

This was a truly enjoyable read by a fantastic author.  I'm so pleased that Ben got a sequel because he's such a great character that you really take him to your heart.  Fans of the original will be sure to love this book.