Anywhere by Jon Robinson, published by Puffin on 3rd July 2014

Goodreads synopsis:
Six kids have escaped from a prison in the middle of nowhere. Now they're being hunted.

And they're beginning to realise they have a valuable skill - a skill that powerful people want for themselves.

They need to use it now more than ever, but can they learn how to in time? 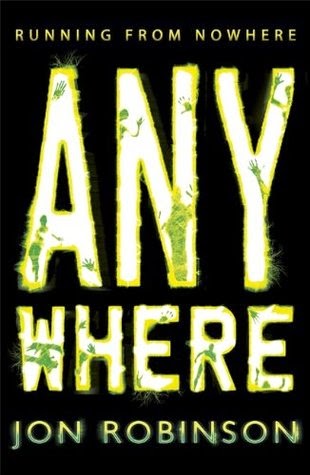 Review:
*There may be spoilers from the previous book in the series

'Anywhere' is the second book in this exciting conspiracy series about teenagers Alyn, Jes, Ryan and Elsa, along with Harlan and Julian, as they try to leave the terrible existence of Nowhere behind them.

The teens are separated as they go on the run, determined that they will never return to the terrible prison in which they were held.  As they learn more about their special abilities, they have to decide how to use them and who to trust.  As the characters all become separated, it means that we get to see them trying to survive in different situations and locations, with varying levels of success.  This kept the story flowing and provided plenty of opportunities for plot development.
I am over the moon that finally some of my questions have been answered.  I thought the explanation behind their captivity was actually quite plausible and believable which made it all the more scary.  It was great getting to find out more about the people and the organisation behind it all.  But be warned, they are scary bunch of individuals, particularly the insane Stephen!
Each chapter in the book is fairly short but impactful and there is always something happening which means that the story rockets along at breakneck speed.  I finished reading this in one evening because it was just so addictive that I couldn’t put it down.  A pacy and exciting read that fans of the TV series Misfits will definitely want to pick up.
Please let me have the final book now!  Somewhere’ is due to be published in 2015.
Posted by Samantha (A Dream of Books) at 00:00