Review: Bad For You - Abbi Glines

Bad For You by Abbi Glines, published by Simon and Schuster on 14th August 2014

Goodread synopsis:
Addiction is part of Krit Corbin’s nature—and women have always been his favorite obsession. But that’s the life of a lead singer in a band. He can have any woman he wants—anywhere, anytime. Well, except for one.

Blythe Denton is used to being alone. The minister’s family who raised her never accepted her as their own, and the cruel minister’s wife made sure Blythe understood just how unworthy she was of love. So when she finally gets the chance to live by herself, Blythe takes it and moves into an apartment building with a loud upstairs neighbor who keeps throwing parties all night long.

It’s during one such party when Krit opens the door to find his new neighbor standing there. Blythe wants him to turn down the music, but he convinces her to stay. She’s nothing like the women who parade in and out of his apartment, but Krit can’t resist her—her brown hair, cute glasses, and sexy innocence is too much for him to ignore.  Determined to win Blythe over, Krit Corbin may have just found his biggest addiction yet. 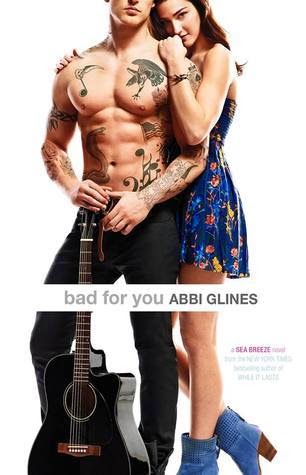 Review:
'Bad For You' is the seventh book in the Sea Breeze series and one of my favourites so far!  I literally fell in love with this one and I can't wait to pick it up and read it all over again.  In the meantime, I may just go back and re-read some of my favourite Krit and Blythe moments.

I wasn't too sure about Krit from the glimpses I'd had of him in the previous book 'Misbehaving'.  Although he'd shown me some attractive qualities, he also came across as a real womaniser who found it impossible to be faithful to just one woman.  What I love about Abbi Glines however, is that she really gets under the skin of a character and allows you to see their true personality.  I ended up completely changing my original perception of Krit and by the end I had fallen for him and fallen hard.  Blythe is one lucky girl!  Krit's addictive personality means that he quite quickly becomes infatuated with Blythe - even when he is still trying to deny his feelings for her to himself.  Although he is extremely experienced, she is not and I thought it was touching that he was so tender and caring where she was concerned, never making her take the next step until she was ready.

In comparison, I loved Blythe from the very beginning.  We share some similar character traits and she is the kind of person who I would have liked to have had as a best friend.  Although she is shy and hates to be the centre of attention, she never fails to speak up for Krit and sees the real him, underneath the tattoos and piercings and his rock star persona.  I  enjoyed seeing how she interacted with the other people in Krit's life too, especially his sister Trisha, who has always been the one to defend and protect him in the past.  Even though she has had a really tough upbringing and has never been shown an ounce of love, she is still willing to open herself up to others and lay herself bare.  I admired so many things about her that I think she may even be my favourite female character of the whole series.

I never want to leave Sea Breeze - I adore the characters and their stories and I could go on reading about them forever!  Abbi Glines never disappoints me with her truly fantastic books and 'Bad For You' has shot right to the top of my best reads of 2014.