The Possible by Tara Altebrando, published by Bloomsbury Childrens on 1st June 2017

Goodreads synopsis:
It's been thirteen years since Kaylee's infamous birth mother, Crystal, received a life sentence for killing Kaylee's little brother in a fit of rage. Once the centre of a cult-following for her apparent telekinetic powers, nowadays nobody's heard of Crystal.

Until now, when a reporter shows up at Kaylee's house and turns her life upside down, offering Kaylee the chance to be part of a high-profile podcast investigating claims that Crystal truly did have supernatural mind powers. But these questions lead to disturbing answers as Kaylee is forced to examine her own increasingly strange life, and make sense of certain dark and troubling coincidences . 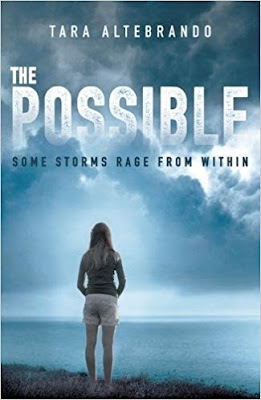 ‘The Possible’ is the first book that I’ve read by Tara Altebrando but it definitely won’t be the last because boy, was it good!  I read it in one evening because I couldn’t put it down.
What I particularly liked about this title was that the story wasn’t formulaic and it made me question everything that I was reading.  I wasn’t sure whether or not I could trust Kaylee, the narrator of the book and so this threw a lot of doubt onto some of the events that took place throughout the story.  Did it really happen?  Is Kaylee telling the truth?  Half of the fun of the book was trying to unravel everything and find out what was really going on.  This kept me on the edge of my seat as the mystery deepened and the suspense intensified.
I have to admit that the plot of the book is not normally one that would attract me.  The main character Kaylee is approached by a woman who is making a podcast series about her birth mother Crystal.  Twelve years ago, Crystal was found guilty of killing Kaylee’s younger brother Jack but always maintained her innocence.  At the time of the murder, there was quite a bit of furore surrounding Crystal and whether or not she had telekinetic powers.  This definitely isn’t the type of story that would appeal to me normally but I was in the mood for something different and this fit the bill.  What was so great, is that I ended up loving it.  It really hooked me in and I was desperate to get to the bottom of the mystery.
As Kaylee finds out more about her birth mother and remembers her own role in events at the time, she becomes more and more curious about her own abilities.  I like the way that Tara Altebrando explores the topic of perception and shows that a lot of things that happen can be interpreted or seen in different ways, according to the individual’s perception of them.  Kaylee is quite a unusual narrator and I wasn’t entirely sure that I liked her in the beginning, but she had grown on me a lot by the end of the book.
I would encourage you to pick up ‘The Possible’ if you are a fan of mysteries, love a good suspense novel or are just looking for something different and original to read.  I want to read Altebrando’s entire back catalogue now which I hope are all as good as this brilliant title.
Posted by Samantha (A Dream of Books) at 00:00