Fire in You by Jennifer L. Armentrout, published by Hodder on 27th April 2017
Goodreads synopsis:
Six years ago, Jillian Lima's whole world was destroyed. The same night her childhood love Brock Mitchell broke her heart, her life was irrevocably altered by a stranger with a gun. After years spent slowly rebuilding the shattered pieces of her life, Jillian is finally ready to stop existing in a past full of pain and regret and is determined to start living. The one thing she never expected was the impossibly handsome Brock walking back into her life...

Brock can't believe that the breathtaking woman standing before him now is the little girl who used to be his shadow growing up. Unable to stay away from each other, their tentative friendship soon sparks into something more and the red-hot chemistry sizzling between them can no longer be denied. But falling for Brock again risks more than just Jillian's heart. When the past resurfaces, and a web of lies threatens to rip them apart, the fallout could lay waste to everything they've ever cared about... 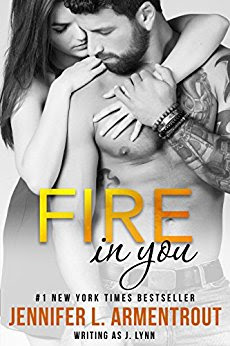 Review:
‘Fire in You’ was a sizzling and sensational romance. I absolutely loved it. Jennifer L. Armentrout is one of my favourite authors and she hands down writes the BEST romances.

It’s funny because when I started reading this book, I wasn’t completely sold on the character of Brock. He seemed to have just waltzed back into Jillian’s life on a whim and he appeared overly cocky and arrogant. But then I began to fall for him as he showed his softer more caring side. He won’t give up on Jillian and is determined to prove to her that he is there to stay. By the second half of the book I wanted them to get together so badly.

I loved Jillian. She’s been in love with Brock ever since she was a little girl. She has never loved anyone else like she loves him. She’s also incredibly brave and has had to overcome the events of one terrible night which is continually hinted at throughout the first half of the story.

I really liked the setting of the book and the backgrounds of the characters. Jillian comes from a long line of Lima’s, who run a very successful family business. They own a string of mixed martial arts facilities where they train fighters. Brock is one of their MMA champions. These are definitely not your traditional occupations but I enjoyed reading about them.

As Brock begins to break through Jillian’s defences, she starts to open up to him and shows him a side of her that she had long hidden. I loved the scenes where they begin to get to know each other again. They were perfectly written and one of my favourite parts of the book.

‘Fire in You’ was absolutely fantastic and such a treat to read. I’m eager now to get my hands on all of the other books in the series. There were lots of different characters and couples referenced throughout the story and I’m looking forward to reading more about how they all ended up together.:
Posted by Samantha (A Dream of Books) at 05:43