Goodreads synopsis:
It's been five hundred years since the end of the world and society has rebuilt itself anew. The old Norse gods are no longer revered. Their tales have been banned. Magic is outlawed, and a new religion - the Order - has taken its place.

In a remote valley in the north, fourteen-year-old Maddy Smith is shunned for the ruinmark on her hand - a sign associated with the Bad Old Days. But what the villagers don't know is that Maddy has skills. According to One-Eye, the secretive Outlander who is Maddy's only real friend, her ruinmark - or runemark, as he calls it - is a sign of Chaos blood, magical powers and gods know what else..

Now, as the Order moves further north, threatening all the Worlds with conquest and Cleansing, Maddy must finally learn the truth to some unanswered questions about herself, her parentage, and her powers. 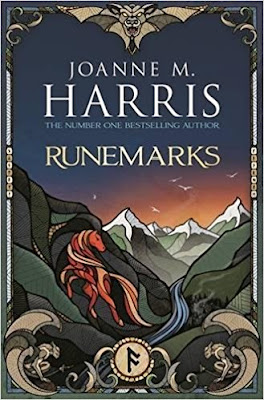 Review:
I thought that ‘Runemarks’ was magnificent and one of Joanne M. Harris’s best books. I loved ‘The Gospel of Loki’ which I’d read previously and this was just as good, if not better.

It’s aimed at a YA audience, although the story is so sophisticated and the adventure so thrilling that I think adults would also enjoy it.

I really love Norse mythology and tales about the Gods – Loki, Thor and Odin. I’ll admit that I don’t always remember every one of the varied cast of characters but I enjoy reading about them immensely, especially Loki the Trickster. I only wish that my knowledge and understanding was better so that I could appreciate all of the nuances even more.

Harris has done an incredible job weaving a story around them. The catalyst for the tale is a young girl called Maddy who lives in the small village of Malbry and has a special mark on her hand – a runemark no less, which gives her magical abilities. She also has an unusual friendship with a one-eyed stranger who visits her every year.

Maddy and her journey through the World Below with Loki (am I the only one that pictures Tom Hiddleston in my mind every time he is mentioned?!) was thrilling to read and kept me gripped for all 513 pages of this bumper book. There are twists and turns aplenty, as well as tons of excitement and adventure and some life and death situations thrown into the mix too. I loved it all!

I really need to read ‘Runelight’ now. I didn’t even know that there was a follow-on when I started reading this book but now I want it desperately. ‘Runemarks’ had me enthralled and I can’t wait to continue the adventure.