Girlhood by Cat Clarke, published by Quercus Children's Books on 4th May 2017


Goodreads synopsis:
Harper has tried to forget the past and fit in at expensive boarding school Duncraggan Academy. Her new group of friends are tight; the kind of girls who Harper knows have her back. But Harper can't escape the guilt of her twin sister's Jenna's death, and her own part in it - and she knows noone else will ever really understand.

But new girl Kirsty seems to get Harper in ways she never expected. She has lost a sister too. Harper finally feels secure. She finally feels...loved. As if she can grow beyond the person she was when Jenna died. Then Kirsty's behaviour becomes more erratic. Why is her life a perfect mirror of Harper's? And why is she so obsessed with Harper's lost sister? Soon, Harper's closeness with Kirsty begins to threaten her other relationships, and her own sense of identity. How can Harper get back to the person she wants to be, and to the girls who mean the most to her? 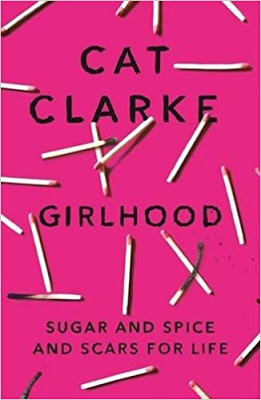 Review:
‘Girlhood’ by Cat Clarke is good but I’m afraid that I can’t rave about it like I could with some of her previous books. I did enjoy it and it was well-written but for me, the story itself fell a little short.

It is set at a Scottish all girls boarding school. I love, love, love stories which feature boarding schools. I think this can be traced back to adoring series like the Chalet School and St Clares when I was younger and more recently Robin Stevens Murder Most Unladylike books. It makes for such a brilliant setting for a story.

The first few chapters of ‘Girlhood’ introduce the reader to the main character Harper and her three best friends Rowan, Ama and Lily. There is some background provided to Harper’s family history and Harper confesses that she feels responsible for her sister’s death. Now, at this point, I was expecting the book to develop into a psychological thriller with lots of twists and turns and surprises along the way. That has typically been the formula with most of Cat Clarke’s other books and is something that I always enjoy. Instead, we are presented with a story which focuses mainly on an exploration of the relationship between best friends. In Harper’s case, her friends are like her family. They tell each other everything, spend practically all of their time together and live in each other’s pockets. The close bond between the girls is upset when the dynamic shifts with the arrival of new girl Kirsty. Suddenly their tight little group of four, doesn’t feel quite so cosy anymore.

When I reflect on the story, I honestly don’t feel that an awful lot happened and that contributed to the slow pace of the narrative. The focus is firmly on how Kirsty’s arrival affects the relationship between Harper and her friends and how things change as they begin to ready themselves for the next step in their lives.

There were some parts which I thought might have been expanded on more, such as the events surrounding Harper’s sister’s death and there were some bits which I felt seemed less than believable, such as the reaction of the girls at the end of the book. With regards to the latter, it appeared that everything was leading up to a big showdown at the end of the story which then didn’t really happen.

I know that it must sound like I didn’t particularly enjoy ‘Girlhood’ but the truth is that I did. I guess the problem was that I had certain pre-conceived ideas about the book which didn’t match up to the reality of reading it. Although this wasn’t a five star read for me, I have loved some of Cat Clarke’s other books in the past and will still be looking out for new titles by her in the future.
Posted by Samantha (A Dream of Books) at 00:33