A Royal Match by Tyne O'Connell, published by Piccadilly Press on 29th April 2011

Goodreads synopsis:
When LA-born Calypso Kelly arrives at the exclusive all-girls British boarding school, St. Augustine's, she's determined to become popular. But when a photo of Calypso kissing England's heir to the throne, Prince Freddie, ends up in the tabloids, it will take quick thinking to save her reputation-and her relationship with the prince.

After the tabloid disaster, Calypso hopes her next term at St. Augustine's will be better. But nothing could be further from the truth. Her archenemy (and culprit of the tabloid disaster) Honey O'Hare is her new dorm mate and her invite to the Annual Euro Royal Bash is nonexistent. Will a flirtation with a hot new sports star from the boys' school ruin her chances with Prince Freddie? Calypso has some work to do if she wants to go from pumpkin to princess in time for the ball. 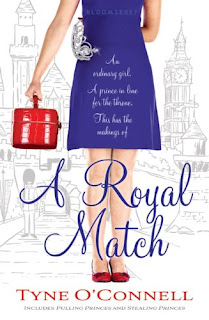 Review:
If you were hit by Royal wedding fever this year and you have recurring dreams of meeting a handsome Prince then this is the book for you!  It's a perfect fairytale romance set in an all girls boarding school featuring hot guys, crazy nuns and plenty of kissing.

This volume actually consists of two books: Pulling Princes and Stealing Princes which were originally published as separate titles.  They've been combined here and republished as 'A Royal Match' with a very attractive cover that had been catching my eye every time I went into my local bookstore.  It's now very happily adorning my own bookshelves!

I love stories set in boarding schools and this one was no exception.  Calypso Kelly, our heroine, is sent to Saint Augustines in England after her American parents decide that she must have the best education that money can buy.  Of course, they have no idea about the trials and tribulations that Calypso has to face on a daily basis such as sharing a room with spoilt rich girls who consider her beneath them because she doesn't come from a long line of lords and ladies.  She does however have plenty of fun too; sneaking out at night, meeting boys and indulging her love of fencing.
Plus kissing...oh yes, there's lots of kissing!

I absolutely adored the setting of this book!  Tyne O'Connell really manages to capture the experience of attending a boarding school with all the etiquette that goes along with it.  The descriptions of all the teachers and nuns were hilarious and I honestly could not stop laughing while I was reading this.

I really enjoyed this book.  It was a fun and entertaining read with a sassy, amusing heroine who I loved.  The ongoing romantic saga between Calypso and her two boy crushes, Billy and second-in-line to the throne Freddie was my favourite part of the story.  I mean what's a girl to do when she has a gorgeous Prince to date!
Posted by Samantha (A Dream of Books) at 00:00