The Wood Queen by Karen Mahoney, published by Corgi on 2nd February 2012

Goodreads synopsis:
Donna Underwood is in deep trouble.An ancient alchemical order is holding her accountable for destroying the last precious drops of the elixar of life. Never mind the fact that Donna was acting to free her friend, Navin, from the dangerous clutches of the Wood Queen at the time. But what the alchemists have in store is nothing compared to the wrath of the fey. The Wood Queen has been tricked and Donna must pay. Get ready for all hell - quite literally - to break loose... 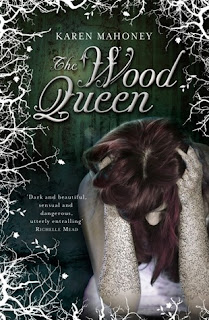 Review:
I previously enjoyed the first book in this trilogy so I was looking forward to the sequel and finding out what was going to happen to Donna Underwood next.  'The Wood Queen' was an extremely entertaining read and I think even better than it's predecessor.  I picked up the thread of the story right away and immediately felt plunged back into Donna's world.  She's now on trial for her involvement in destroying the last remaining drops of the Elixir of Life but is still intent on finding a cure for her institutionalised mother who she believes is under a curse.

I love the world that Karen Mahoney has created in this series.  Vivid imagery made the wood elves and Ironwood come alive on the page and made me believe that there are more things out there than humans can normally perceive.  The four Orders of the alchemists - Crow, Lion, Dragon and Rose are equally fascinating and each have a hand in the book in deciding Donna's fate.

Donna's best friend Navin really grew on me throughout the story as I wasn't too keen on him in 'The Iron Witch'.  There's a very amusing transcript between him and Simon Gaunt at the end which made me laugh.  I admire his loyalty to Donna and the courage he shows, plus the way she can spring almost anything on him and he'll try and take it all in his stride.

There's romance in the book as well between the mysterious Xan and Donna.  He's definitely hiding things from her and I can't wait to find out what they are, but in the meantime there's also trouble in paradise with the introduction of a new character called Ivy who shares past history with Xan.

'The Wood Queen' is a dark and bewitching tale of magic and power and an impressive sequel which has left me wanting more.  Donna is faced with trying to sort out her future and what path she should take and I'm intrigued to see where Donna's adventure will lead her next.  I hope that the story will relocate to London as it would be brilliant to see her on British soil.
Posted by Samantha (A Dream of Books) at 00:00