Dreaming of Beauty by Kristen White, published by Createspace on 15th September 2011

Fifteen year old Chloe Duncan finally has her Prince Charming and life could not be more perfect. But after she meets a mysterious new boy on the first day of school and has the first of what become increasingly haunting dreams of the ocean, her story-book romance quickly unravels. Certain that the dreams and other bizarre things that have happened to her are due to an undiagnosed brain tumor, Chloe struggles with school and her relationships. Fate sweeps her across the world to France, and it is there, at Manoir de Kergrec, the enchanting castle by the sea, that she learns about Camille Deveraux, a girl who lived at the manor over three hundred years ago. But things are stranger in France then they were back home, and Chloe soon discovers that she was Camille Deveraux, the real Sleeping Beauty. 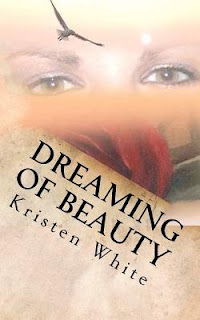 Review:
I'm always drawn to stories which rework traditional fairy tales and give them their own unique spin.  Kristen White does this in 'Dreaming Beauty', the premise of which is a modern day twist on the classic tale of Sleeping Beauty.  Chloe is your average fifteen year old teenager who loves her adoring boyfriend Evan but becomes unsettled by the arrival of new boy Logan.  Desperate to resist him, Chloe starts having vivid dreams of another life and finds herself caught in an ancient love triangle.

The plot of this book sounds good and on the whole it was a fairly enjoyable read but in some areas it fell a bit flat and didn't always work for me.  I thought that the characters were quite one-dimensional and the dialogue was sometimes too stilted and unnatural.  This meant that it didn't always flow on the page.  I also didn't feel entirely invested in the romance between Chloe and either of the two male characters which was a shame as I'm a sucker for a teenage love triangle.

The book is split into three parts.  The second part is set in France and centres around Camille Devereaux, the original Sleeping Beauty.  I was a little confused at first because of the change of narrative although I soon adjusted to this but I think the transition between the three parts could have been slightly smoother and more seamless so that it felt more like one story rather than separate parts.

The ending was intriguing and seemed to set things up for a sequel about Evan and Logan's big sister Ashley.  I haven't heard anything about this though so I'm not sure if the author is planning to write another book about the characters.  I loved the idea for the story of 'Dreaming of Beauty' but overall it failed to sweep me off my feet.
Posted by Samantha (A Dream of Books) at 00:00