Goodreads synopsis:
He's days away from becoming a full Guardian, and people around the world are already competing for the chance to be watched over by him. Everyone's obsessed with the Angels and the lucky people they protect - everyone except for Madison Montgomery.

Maddy's the one girl in Angel City who doesn't breathlessly follow the Angels on TV and gossip blogs. When she meets Jackson, she doesn't recognize him. But Jackson is instantly captivated by her, and against all odds the two fall in love.

Maddy is swiftly caught up in Jackson's scene, a world of glamour, paparazzi - and murder. A serial killer is on the loose, leaving dead Angels' wings for the police to find on the Walk of Fame. Even the Guardians are powerless to protect themselves in the face of this threat & and this time it's up to Maddy to save Jackson. 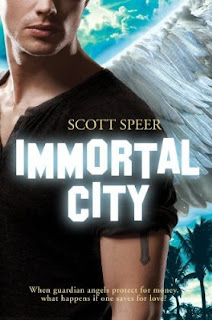 Review:
I'd heard about this book prior to publication and really loved the idea of angels living among humans and being given celebrity status.  What a cool idea!  The angels act as guardians to those who can pay for protection or those who are lucky enough to be gifted with a guardian.  I really liked the way that Scott Speer discussed the culture of celebrity status through the role of the angels with them being placed on pedestals and worshipped because they happen to be in the public eye and are rich and privileged.  It was also refreshing to read an angel book where the angels are actually out in the open and not a big secret.  All in all, I thought it was a unique and interesting spin on the traditional angel story.

This is actually Scott Speer's debut novel and has already been optioned for television development by the producers of Gossip Girl and The Vampire Diaries.  So we may soon be seeing angels on the small screen!

The two main characters, Maddy and Jackson Godspeed, offer alternating third person narratives and I enjoyed getting to see events through their eyes.  I really liked the character of Maddy who is down to earth and sensible, until she begins to lose her head over Jackson.  She doesn't have as privileged a lifestyle as some of the other teens at her school but she never complains and always seems to take things in her stride.  It took me longer to warm up to Jacks but he had grown on me by the end of the book.  On the other hand, I felt that Maddy's other friend Ethan was a bit underdeveloped and at times seemed too much on the periphery.  He does have an important part to play in the story but I would have liked to have seen his motivations explored a little more.

The story started slowly but the action picked up from the middle of the book and the ending was brilliant.  The plot was entertaining and engaging and sucked me in as it progressed with it's equal measures of romance, action and adventure.

I'm looking forward to seeing how Maddy will cope with the hand that fate's dealt her in the next in the Immortal City trilogy.

Here's the awesome trailer for the book which if I hadn't read it already would definitely make me want to pick up this title.