Sweetly by Jackson Pearce, published by Hodder on 1st October 2011

Goodreads synopsis:
As a child, Gretchen's twin sister was taken by a witch-like monster in the woods. Ever since, Gretchen and her brother, Ansel, have felt the long branches of the witch's forest threatening to make them disappear, too.

When their stepmother casts Gretchen and Ansel out as teens, they stumble upon a sleepy Southern town and are invited to stay with Sophia Kelly at her sweet shop. Sophia molds candied magic: coveted treats that create confidence, bravery, and passion.

Life seems idyllic and Gretchen and Ansel finally start to forget their haunted past - until Gretchen meets handsome local outcast Samuel, who gives Gretchen a reason to fear Sophia: girls have been vanishing at Sophia's annual chocolate festival, taken by the insatiable 'witch' of Gretchen's nightmares. Can Gretchen save herself, the girls of Live Oak, andSophia?

Of one thing, Gretchen is certain: a monster is coming, and it will never go away hungry. 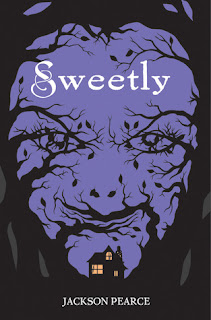 Review:
I absolutely loved 'Sisters Red' by Jackson Pearce and couldn't wait to get my hands on 'Sweetly' which I devoured in one sitting.  It's a spin on the classic fairytale of Hansel and Gretl and is a perfect confectionery dream of a book!  You'll want to curl up with a mug of tea, something sweet to eat and savour every single word of this awesome story.

Gretchen's twin sister was taken when they were 6 years old.  Gretchen and her older brother Ansel escaped but their lives fell apart after that single tragic event which changed their future paths forever.  When their father dies and their step-mother throws them out, they take to the road and end up in a small town called Live Oak.  They eventually end up living with Sophia Kelly, a chocolatier who offers them a roof over their head in exchange for them helping her with jobs around her house.  What at first seems to be a perfect arrangement soon turns into something far more sinister when Gretchen discovers that each year girls go missing from Live Oak and are never seen again.  She's determined to find out the truth about Sophia's involvement but soon discovers some surprising secrets about the town and about her own sister's disappearance.

I really loved the plot of 'Sweetly' and the way that Jackson Pearce takes a story which everyone is familiar with and turns it into something completely different which keeps you guessing and keeps you on your toes.  Whilst Gretchen and Ansel enter what seems to be a fairytale world complete with the wonderful aroma of melting chocolate and delectable sweets which cure every ailment, surrounding them is the dark and eerie forest and a mystery that must be unravelled.

The bond between the two siblings was wonderfully written and this is something which I previously enjoyed in 'Sisters Red' too.  Their relationship is real and you can see that they'd stand by each other no matter what.  Although Ansel has always been the one to look after his sister and protect her, in many ways, when they arrive in Live Oak, this is reversed and it's Gretchen who really opens her eyes to what's happening around them, whilst Ansel is struck by the pangs of first love and oblivious to anything apart from the charms of Sophia.

I was wondering if the Fenris were going to rear their heads again and I wasn't disappointed when Gretchen first encounters werewolves in the woods.  Finally equipped with the knowledge of what actually happened to her sister, she determines to meet this threat head on and this leads to some action-packed chapters which had me completely gripped.

A real page turner, this book had everything I wanted and more.  The story was addictive reading, the characters were real and tortured, the mystery was dark and complex and the romance sizzling.  I wanted to eat this book it was so good and Jackson Pearce is fast becoming one of my absolute favourite authors!
Posted by Samantha (A Dream of Books) at 00:00