Goodreads synopsis:
April Dunne is having a rough time. There are vampires in her school. Not Goths, or Emos in fancy dress. Dangerous, blood-sucking semi-immortals. They run the school. They pretend to be students at it. And they're using their influence to recruit smart, rich students - aka 'bleeders' - to their own cause. What is that cause? April isn't sure. But she knows they killed a rock star for it, and innocents who got too close to the truth. One of them almost killed her. But that's nothing to what's coming next. Gabriel, her kinda-boyfriend, is dying and unless April can find a cure then not only is she going to be boyfriendless, she's also going to lose one of her major allies in the school. And she really needs allies. Because it turns out April has an ability of her own, one that could prove lethal to the 'Suckers' who've taken over the school. If any of them figure out what she is, then losing her boyfriend will be the least of her problems ... 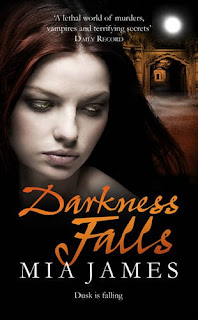 Review:
There may be spoilers in this review from the previous book in the series.

'Darkness Falls' is the second book in the Ravenwood Mysteries series by Mia James (the pseudonym for husband and wife writing duo Tasmina and John Perry).  The story picks up from where 'By Midnight' left off.  April is learning to cope after her father's death and after the shocking discovery that she is a Fury - the one thing that vampires truly fear.  Having introduced all the characters and established the storyline, it was nice to see a bit more action in this installment as April faces the truth about who she really is and determines to track down the person responsible for her losing her beloved dad.

One of the things that I really like about this series is the complex mystery that lies at the heart of the plot.  There are lots of angles, dead ends and unexpected twists throughout.  You never quite know who you can trust from The Faces who are the most popular girls in school, to DI Reece who's investigating April's father's murder, to the teachers who work at April's school.  Trust them at your peril because no one is really who they say they are!   I certainly think there's a lot more to April's mother than meets the eye.  She comes across as rather shallow and unreliable but I suspect she's hiding a big secret and I can't wait to find out what it is.

I also love the setting for these books.  Highgate Cemetery in London is so spooky and creepy and wonderfully atmospheric.  It's a perfect backdrop for a British book about vampires.  There are some fabulous descriptions of the Cemetery itself and whenever the characters are there you just know that something bad is going to happen.

The thing that I felt fell a little flat was the romance between April and Gabriel.  Gabriel is gorgeous, sexy, brooding and an extremely enigmatic and mysterious figure.  Having got their romance off to a promising start, it seemed to become extremely up and down over the course of the book.  I thought that April was quite quick to mistrust him and jump to conclusions about his actions, considering she's supposed to be in love with him.  I didn't feel a real connection between the two of them although separately I really like their individual characters.  There just weren't enough sparks between them to satisfy the romantic in me.

'Darkness Falls' had a stellar, explosive ending which definitely left me wanting more.  I can't wait to see what Mia James has up her sleeve next!
Posted by Samantha (A Dream of Books) at 00:00