Velvet by Mary Hooper, published by Bloomsbury on 5th September 2011

Goodreads synopsis:
Rose is a laundress in a Victorian steam laundry. With both her mother and father dead, she is an orphan and has to rely upon her own wits to make a living. The laundry is scalding, back-breaking work and Rose is desperate to create a better life for herself. Then Rose is noticed by Madame Savoya, a famed medium, who asks Rose to come to work for her. Rose is dazzled at first by the young yet beautifully dressed and bejewelled Madame. But soon Rose realises that Madame is not all that she says she is, and Rose's very life is in danger... 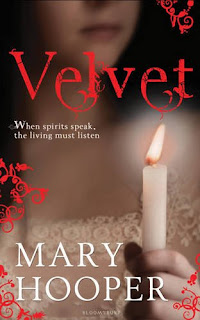 Review:
I actually haven't read anything by Mary Hooper before but when I first heard about 'Velvet' I was instantly drawn in by the concept of a story about spiritualists and mediums set during the Victorian era.  I find it fascinating how people could (and obviously still can) be drawn into trying to communicate with their dead friends, relatives and loved ones and how the craze for spiritualists swept across England during this period in time.  The rich squandered huge sums of money on this and were so captivated by entrancing clairvoyants that they were in some cases willing to do just about anything to maintain a connection with the dead.  Hooper lays bare all the tricks of the trade as she shows the lengths mediums were prepared to go to in their quest to fool those grieving for wives, husbands, daughters, brothers etc and in the process secure a hefty sum of money for their own pockets.

I really enjoyed the fact that although this was a historical novel and huge amounts of research had obviously been done to ensure that the Victorian era was recreated authentically, particularly through the use of Old Bailey records, the book was still rich in a character driven plot which really came to life on the pages.  I loved the main character Velvet who goes to work for Madame Savoya as her assistant, after losing her job in a steam laundry.  She hopes to better herself after losing her mother and believing her father dead.  Velvet is a pretty gutsy character and has had to learn to survive and stand on her own too feet.  Although I found her to be a little naive at times whilst in the employee of Madame Savoya, she does eventually open her eyes to what's going on around her and when she unravels all she's seen and witnessed, she isn't afraid to speak up and try to put things right.

Returning to the subject of historical research, I also found the notes at the back of the novel incredibly interesting, with Mary Hooper's own words and insights into spiritualism and baby farms.  The inclusion of a sub-plot featuring baby farms was horrifying but also of course incredibly relevant to the period and really helped to show the absolute depths that some women found themselves having to stoop to when they became with child, but in many cases were unable to keep it themselves as they had to go out and earn a full day's wage.  I couldn't believe that baby farms actually still existed up to a hundred years ago but the incorporation of details such as these assisted in bringing the Victorian era alive.

For those that enjoy a good romance, there's a dash of this added to with Velvet being wooed by handsome and loyal Charlie who she's known since they were children.  Charlie is kind and reliable and is definitely always there when Velvet needs him the most - and even when she doesn't realise she does!

'Velvet' was an extremely enjoyable read and I shall now be seeking out more of Mary Hooper's previous work.  I would definitely recommend it to other fans of historical fiction and for those who are looking for an engrossing and compelling read.
Posted by Samantha (A Dream of Books) at 00:00