The Deviants by C.J. Skuse, published by Mira Ink on 5th September 2016

Goodreads synopsis:
Growing up in the sleepy English seaside town of Brynston, the fearless five – Ella, Max, Corey, Fallon and Zane – were always inseparable. Living up to their nickname, they were the adventurous, rowdy kids who lived for ghost stories and exploring the nearby islands off the coast. But when Max’s beloved older sister Jessica is killed, the friendship seems to die with her.

Now years later, only Max and Ella are in touch; still best friends and a couple since they were thirteen. Their lives are so intertwined Max’s dad even sponsors Ella’s training for the Commonwealth Games. But Ella is hiding things. Like why she hates going to Max’s house for Sunday dinner, and flinches whenever his family are near. Or the real reason she’s afraid to take their relationship to the next level.

When underdog Corey is bullied, the fearless five are brought back together again, teaming up to wreak havoc and revenge on those who have wronged them. But when the secrets they are keeping can no longer be kept quiet, will their fearlessness be enough to save them from themselves? 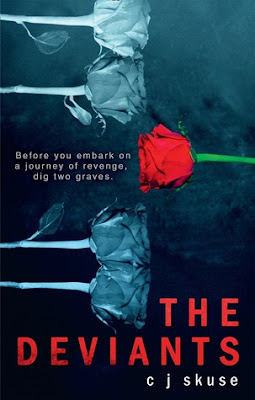 Review:
I loved C.J. Skuse's previous book 'Monster' which was one of my top reads of 2015. I was so excited to read her new novel as the premise sounded utterly brilliant - the Famous Five with a twist.  I thought that 'The Deviants' was a brave book to write and tackled some extremely difficult issues, but while I can admire Skuse's writing and choice of subject matters, I can't say that this is a book which I ended up loving.  Don't get me wrong, it was very good but I also found it extremely dark and hard to read at times.

The novel's main protagonists are teenagers Ella and her boyfriend Max.  They have grown up together and have been a couple since they were thirteen.  Although they practically live in each other's pockets, Ella has a big secret she's hiding which threatens to change everything forever.  Along with Ella and Max, there's also their old friends Fallon, Corey and the mysterious Zane.  They used to do everything together until Max's sister Jessica died and things changed between them.  Brought back together, the gang are reunited in their thirst for revenge, but secrets begin to spill out and it's obvious from the start that Ella knows more than she's letting on about Jessica's death.

I thought that the story started really well and I was intrigued about the direction in which Skuse was going to take the characters.  The first few chapters flew by quickly and I knew that there were going to be some twists and turns ahead.  Everything got very dark in the second half of the book and it dealt with an extremely heavy, hard-hitting topic.  To be completely honest, I'm not sure if I was quite in the mood for something so serious.  It was pretty graphic at times and quite a turbulent ride for the reader.  The ending totally took me by surprise (which seems to be Skuse's trademark) but with reflection, I think I would have actually liked her to have gone in a slightly different direction.

Overall, 'The Deviants' didn't quite meet my extremely high expectations, possibly because it was turned out to be very different to what I was expecting.  That's not to say that this wasn't a good book but I did find it tough going at times.