The Blackthorn Key by Kevin Sands, published by Puffin on 3rd September 2015

Goodreads synopsis:
London, 1665. Fourteen-year-old Christopher Rowe is apprenticed to master apothecary Benedict Blackthorn. In Blackthorn's shop, Christopher learns the delicate secrets of transforming simple ingredients into powerful medicines, potions and weapons. His beloved master guides him with a firm, steady hand - instilling him with confidence and independence that prove increasingly vital as Christopher learns of a mysterious cult preying on the most learned men in London. The murders are growing closer and closer to home and soon Christopher is torn from the shop with only a page of cryptic clues from his master and the unambiguous warning: 'Tell no one'.

Helped by his best friend, Tom, Christopher must decipher his master's clues, following a trail of deceit towards an unearthly secret with the power to tear the world apart. 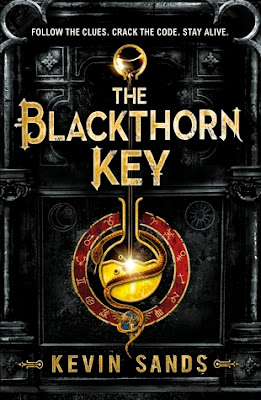 Review:
If you are a Percy Jackson fan looking for your next read, then 'The Blackthorn Key' may well fit the bill perfectly.  It is a story with plenty of twists and turns, some dark secrets to uncover and fiendish clues to crack.  Although I don't often read a lot of middle-grade fiction, this one appealed to me a lot and proved to be a fantastic read.

One of the things I particularly liked about it was the main character, Christopher Rowe.  He is a apprentice apothecary to Benedict Blackthorn, who is more like a father to him than an employer.  Christopher finds himself in deep trouble when a series of murders are committed and he is caught in a web of secrets more dangerous than he could ever realise.

Set just before the plague in London, during 1665, the story hurtles ahead at breakneck speed, taking the reader along for the ride.  You are plunged straight into the adventure, as Christopher has to solve a series of cryptic clues.  The story is like 'The Davinci Code' for a younger generation of readers and I loved it.

If mystery and murder are your kind of thing, then you will definitely enjoy 'The Blackthorn Key' which will take you on an adventure you will never forget!