As Black As Ebony by Salla Simukka, published by Hot Key Books on 6th August 2015

Goodreads synopsis:
Lumikki has a new boyfriend - easygoing, gorgeous Sampsa - but she is unfaithful in her dreams, longing for the electrifying touch of her ex, Blaze.

Then the threats start arriving, from someone who seems to know Lumikki intimately. Sharing her fears risks deadly consequences; now she is more alone than ever.

When Blaze suddenly reappears, Lumikki is torn. She can't deny the chemistry between them, but can she trust him? To stop the killer, Lumikki must uncover a dark secret that has haunted her family for years. 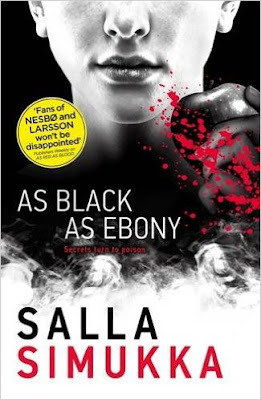 Review:
The third and final part of this series definitely reached the heady heights of the first book.  It was a spell-binding conclusion to the trilogy and had me utterly gripped.  There is something so refreshingly different and original about these books which I can't quite put my finger on but which makes them impossible to put down.

Lumikki is such a fantastic protagonist - one of my all-time favourites.  She does not conform to the usual traits of female characters but that does not make her any less of a heroine.  In fact quite the opposite is true.  She is somewhat of a loner, she lets few people into her life and she is introverted but she is also incredibly brave, determined and will never back down from a fight.

I thought that the series had a little dip with book two but 'As Black As Ebony' reeled it back in and was totally entrancing.  Lumikki is back on home soil with a new boyfriend, but is still convinced that her parents are hiding a big family secret from her.  She also has a new threat to face from someone who seemed to know about all of her own secrets but she has no idea who is behind the threatening letters she starts to receive.  The elusive Blaze, her ex-boyfriend, is also back on the scene, causing her romantic complications.

This story was brilliant.  So many questions were finally answered and threads that had been planted earlier in the trilogy were unravelled, spilling secrets left, right and centre.  It's a little bit of a shame however that everything was wrapped up so quickly at the end, because I think that after a big build-up, more could have been made of the final end scene.  That aside, this was a compulsive and thrilling read which was a real nail-biter.  I wish everyone would read these books.  They are terrific!
Posted by Samantha (A Dream of Books) at 00:00