Goodreads synopsis:
Daisy Wells and Hazel Wong are taking a holiday through Europe on the world-famous Orient Express. From the moment the girls step aboard, it's clear that each of their fellow first-class passengers has something to hide. Even more intriguing: rumour has it that there is a spy in their midst.

Then, during dinner, there is a bloodcurdling scream from inside one of the cabins. When the door is broken down, a passenger is found murdered, her stunning ruby necklace gone. But the killer is nowhere to be seen - almost as if they had vanished into thin air.

Daisy and Hazel are faced with their first ever locked-room mystery - and with competition from several other sleuths, who are just as determined to crack the case as they are. 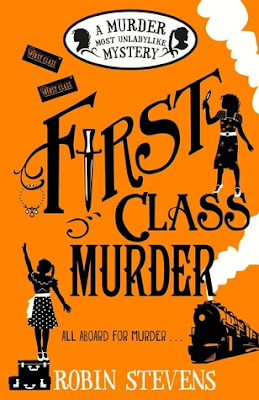 Review:
Wells and Wong are back in their third detective adventure.  They are an unstoppable double act and one of my favourite sleuthing duos.  What could be better then than setting their latest mystery on-board the famous Orient Express.  When a murder is committed on the train, you know that Daisy and Hazel will be hot on the case, uncovering clues and hunting a killer, as they determine to crack the locked room mystery.

I love, love, love this series so much!  I am a massive fan of the detective genre (particularly when like here, it is brilliantly done) and really like the fact that these books are set in the 1930s. They have a classic period feel, but also a freshness and immediacy about them.  Hazel and Daisy are quite an intrepid pair and leave no stones unturned when they start to investigate.

I like the fact that it pays homage to Agatha Christie's original Murder on the Orient Express, and the setting is just fantastic.  I would love to go on this train and it reminded me a little bit of Hitchcock's The Lady Vanishes.  The guilty party is on the train but the girls do not yet know which one of the passengers can not be trusted.  The fact that no one can get off without raising suspicion, lends an air of claustrophobia and danger to proceedings.

I had no idea who the murderer was but I enjoyed seeing Daisy and Hazel untangle all the clues, along with some red herrings.  I read this book in a flash and it was my favourite of the series so far.  Bring on more of the detective society immediately!  Five stars.