Goodreads synopsis:
Daisy Wells and Hazel Wong have returned to Deepdean for a new school term, but nothing is the same. There's a new Head Girl, Elizabeth Hurst, and a team of Prefects - and these bullying Big Girls are certainly not good eggs.

Then, after the fireworks display on Bonfire Night, Elizabeth is found - murdered.

Many girls at Deepdean had reason to hate Elizabeth, but who might have committed such foul play? Could the murder be linked to the secrets and scandals, scribbled on scraps of paper, that are suddenly appearing around the school? And with their own friendship falling to pieces, how will Daisy and Hazel solve this mystery? 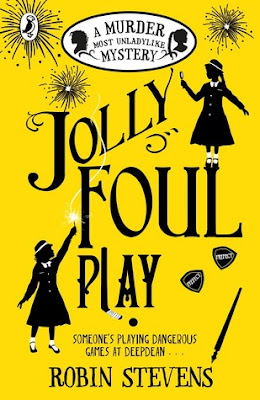 I was beyond excited to start reading ‘Jolly Foul Play’ by Robin Stevens. I’ve been on a bit of a crime kick lately and this series is one of the best. Wells and Wong return to investigate another crime, but this time they have their friends on hand for assistance. The setting of the book is glorious. Deepdean Boarding School is their home away from home. It’s the place where they can enjoy midnight feasts and tuck boxes filled to the brim with an assortment of sweet treats. It’s also, unfortunately, the scene of the crime. I love, no make that adore, stories which are set in boarding schools, so I was really pleased to see Robin Stevens revisiting the place where Hazel and Daisy’s detective society adventures first started.

A lot has happened since those early days. The two girls have solved crime in Daisy’s own home, as well as on board the Orient Express. They have formed a close bond, which this time is tested by another of Hazel’s friendships. Can they still manage to stick together through thick and thin to bring justice to Deepdean? It was interesting to see friction developing between the girls. They are very different characters but their personality traits have always worked well to complement each other. Hazel often has to take a bit of a backseat to Daisy who is more impulsive and headstrong but she has her own unique gifts which often have helped them to crack a case open. Although they are my two favourites, I really enjoyed getting to see their other friends become involved in helping them with the mystery too. Beanie is so sweet and good and Kitty and Lavinia are great side-kicks to have. They all have an important role to play in catching the guilty party.

As the story unravels, all the clues are laid out for the reader to follow. One of the things I enjoy the most is seeing if I can piece everything together and come up with my own theory about what happened and who was involved. Sometimes, I’m right but usually I’m way off the mark. It doesn’t matter though, it’s all part of the fun! There are lots of twists and turns and red herrings as the gang try to eliminate suspects one by one. As Society secretary, Hazel keeps comprehensive notes of the case and these always make great reading, as well as being extremely helpful.

Robin Stevens has done it again with another truly fantastic instalment of the Murder Most Unladylike series. I cannot get enough of these books and seeing the way the story ended, I have a feeling that the next one is going to be another rollicking ride. I can’t wait to join Hazel and Daisy again!