Replica by Lauren Oliver, published by Hodder and Stoughton on 11th October 2016

Goodreads synopsis:
Lyra's story begins in the Haven Institute, a building tucked away on a private island off the coast of Florida that from a distance looks serene and even beautiful. But up close the locked doors, military guards, and biohazard suits tell a different story. In truth, Haven is a clandestine research facility where thousands of replicas, or human models, are born, raised, and observed. When a surprise attack is launched on Haven, two of its young experimental subjects - Lyra, aka number 24, and the boy known only as 72 - manage to escape.

Gemma has been in and out of hospitals for as long as she can remember. A lonely teen, her life is circumscribed by home, school, and her best friend, April. But after she is nearly abducted by a stranger claiming to know her, Gemma starts to investigate her family's past and discovers her father's mysterious connection to the secretive Haven Institute. Hungry for answers, she travels to Florida, only to stumble upon two replicas and a completely new set of questions. 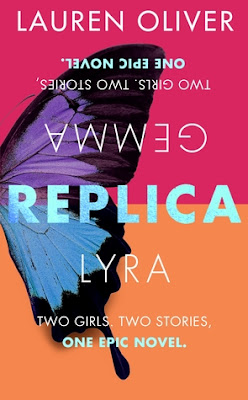 Review:
I was really intrigued when I first heard about this book because of the interesting and unique narrative structure.  It can be read as two separate stories or it can be read in alternating chapters by turning the book from front to back.  I decided on the latter because I was worried that if I read them separately, I might find the plot a bit too repetitive.  I think this worked well and I was pleased with my choice, although I'll admit that I did get a bit fed up with having to turn the book around every few minutes.  That aside, the structure was incredibly clever and provides two differing narrative viewpoints from the main characters Lyra and Gemma.

I enjoyed Gemma's half of the book the most.  The way that she develops as a character was really interesting and the way that she decides to investigate and unravel the secrets being kept from her was enough to keep me glued to the pages.  Her father has a mysterious connection to Haven, a secret research facility and Gemma is determined to find out what is really going on there.  I thought that her journey was fascinating and packed full of surprises.

Lyra was much more mercurial and enigmatic.  Her story starts off with her living at Haven until a pivotal event throws her existence into chaos.  I wasn't sure what to think of Lyra in the beginning until I gradually began to understand more about her and saw her start to open up a little.

I sped through the second half of the book which was particularly gripping and couldn't believe the revelations that came to light.  As this is the first title in a duology, the ending left the reader on tenterhooks and desperate for the follow-up.

Cloning is a hugely pivotal theme in the book and I thought that Lauren Oliver did a terrific job of exploring the different layers and viewpoints surrounding this subject.  I liked reading about all the science behind it and haven't come across any books quite as interesting on this topic before.