Review: Take the Key and Lock Her Up - Ally Carter

Take the Key and Lock Her Up by Ally Carter, published by Orchard Books on 26th January 2017

Goodreads synopsis:
Grace has discovered that she's the lost princess of Adria ... but some people would prefer she stay lost. With her brother's life hanging in the balance and secret assassins everywhere, life on Embassy Row has never been more dangerous. 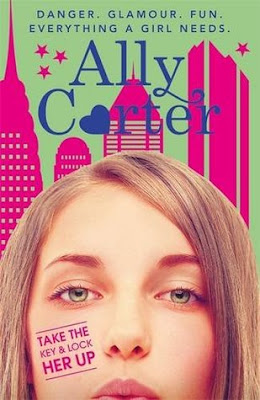 Review:
Ally Carter does it again with what is without a doubt the best instalment of the whole series.  I've been desperate to read 'Take the Key and Lock Her Up' ever since the almighty cliff-hanger ending of 'See How They Run', when Grace discovered that she was the lost princess of Adria.  I dived into this book and devoured it in one sitting because it is pretty much impossible to put down.  Carter doesn't let her foot off of the break once as the story speeds along at an incredible pace.  I was on the edge of my seat from start to finish.

Grace is a terrific character and one who I've grown to like and admire more with each book.  She is tough and determined and pretty kick-ass.  All of the struggles and adversity she has had to face have only made her stronger and more single-minded.  She will do anything to protect the people she loves, even if it means sacrificing herself in the process.  She is also very unpredictable which makes her an exciting character to read about because you are never sure what she will end up doing next. Throughout the story she faces danger from every corner and you are left guessing about where the true threat actually lies.  Is it with the Royal Family or the shadowy Society?

Her romance with Alexei is one of my favourite things about this book.  Their relationship has evolved from friendship to love and I adore the moments when they are being protective of each other, as well as all of those sizzling kisses. I was really rooting for them and I wanted Grace to finally get her happy ending in his arms.  I also liked the way that Grace's other friends rallied around her and helped in whatever way they could.  They are determined not to let her face the danger alone.

The story hurtled from one thrilling escapade to another and I was utterly glued to the pages.  I had no idea what was going to happen next or who was going to make it out alive.  I loved 'Take the Key and Lock Her Up' and I'm only sad that such a fabulous series has come to an end.  Hopefully Ally Carter will be back soon with another new adventure.
Posted by Samantha (A Dream of Books) at 00:00