Nobody Real by Steven Camden, published by HarperCollins Children's Books on 31st May 2018

Goodreads synopsis:
Marcie is at a crossroads.  Finished with school, but unsure what she wants to do next. Abandoned by her mother when she was tiny – but drifting further and further from her dad.

Marcie is real. With real problems.

Thor is at a crossroads too.  Soon, if he doesn't make a decision, he's gong to face the fade. Years ago, he was Marcie's imaginary friend – then she cast him out, back to his own world.

Thor is not real. And that's a real problem…

But Marcie and Thor need each other. And to fix their lives, they're going to have to destroy everything… and then build a new world. 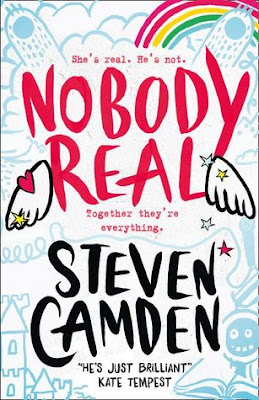 Review:
The author Steve Camden is a spoken word artist and it definitely shows in the poetic narrative style of 'Nobody Real.  There are a lot of short, detached words and sentences which have a lyrical sway but which didn't make the book particularly easy to read.

The story is told by teenager Marcie and her imaginary friend Thor, who she cast away several years ago and whose time is now running out for good.  We see Marcie struggling with family issues and decisions about her future, as she tries to make up her own mind about the path she wants to follow, rather than just trailing in her friend's footsteps.  Marcie is facing choices that many young people have to make which makes the story more relatable to it's contemporary YA audience.

I think this is actually the first book I've read which features an imaginary friend.  I've been racking my brains to think of another but nothing has come to mind.  The chapters from Thor's perspective were intriguing but I struggled to wrap my head around a part-boy part-bear whose day to day life consists of demolishing buildings.

My main problem with the book was that in theory I liked the idea of the novel but in reality, I found it quite a disjointed and difficult read which I never really connected with.  It wasn't my kind of book at all, but I have already passed this onto a friend who I think will love it.  Not every book can be everyone's cup of tea and this just wasn't for me.
Posted by Samantha (A Dream of Books) at 00:00