Welcome to today's stop on the blog tour for 'The Everlasting Rose' by Dhonielle Clayton. This is the second book in The Belles duology. 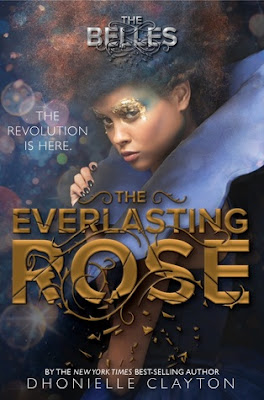 Goodreads synopsis:
Camellia, her sister Edel, and her guard and new love Remy must race against time to find Princess Charlotte. Sophia's Imperial forces will stop at nothing to keep the rebels from returning Charlotte to the castle and her rightful place as queen. With the help of an underground resistance movement called The Iron Ladies-a society that rejects beauty treatments entirely-and the backing of alternative newspaper The Spider's Web, Camellia uses her powers, her connections and her cunning to outwit her greatest nemesis, Sophia, and restore peace to Orleans.

Review:
'The Everlasting Rose' is the second book about The Belles and picks up where the previous story finished. The main character Camellia and her sister Edel are on the run, along with Remy, one of the palace guards. They are desperate to find the ailing Princess Charlotte and restore her to her place on the throne. Along the way they're helped by the mysterious Iron Ladies who have rejected the beauty treatments that the rest of society are so dependent and reliant on.

I felt like Camellia became a much more rounded character in this book. She is far more confident in herself and determined and she goes into the action with her eyes wide open. She has a mission to wrest control of Orleans away from Sophia and she will literally stop at nothing to prevent her evil reign. I wish that we'd found out more about the Iron Ladies because they were an interesting addition to the story but maybe Dhonielle Clayton is planning to do a spin-off on them in the future.

My feelings about this book are very similar to those I had for 'The Belles'. It was a good read and I did enjoy it but I didn't love it. I thought that the first half of the story was meandering and rather slow and then the ending was exciting but felt quite rushed. Everything seemed to happen all at once although it was a fitting end to the story and nicely tied up all the plot threads.

If you're a fan of the first book then I'm sure you will enjoy 'The Everlasting Rose'. I tend to feel that it bordered too much on the fantasy genre for my tastes but I will definitely be checking out future titles by Dhonielle Clayton.