I'm very lucky to have Mary Hoffman here today, taking part in her blog tour for her new book 'David'.  I'm the 22nd stop on the tour.  For a full itinerary of all the blogs taking part click on the banner below.

My five favourite places in Italy (beyond Florence )

• The Campo in Siena

The fan-shaped square where the Palio is run twice each summer. When the race isn’t on, the perfect place for morning coffee or evening prosecco – and people-watching.
I go to Siena almost as often as Florence (my ideal home would be between the two) but have seen the Palio run only twice – once in 2002 when I was researching it for City of Stars, when I stood in the Campo with a million or so other people and once in 2009 when I sat in relative comfort in a stand. Neither time did “my” horse win (see below)

• The Valdimontone district in Siena
I am an honorary “montonaiola”! The first time we ever set foot in Siena (?1996) by great good fortune we found a place to park just inside the Porta Romana. Little did we know how significant it would become for us, especially me. As you walk into the centre from that gate, you pass many signs of the Ram, because the Contrada of Valdimontone (Valley of the Ram, called “Montone” for short) is off to the left of the Via Roma there.

Now whenever we go back we stay at an olive-growing estate just outside the Porta Romana and every time I walk up the steep road to where the montonaioli hang out, I feel as if I am coming home. I have always believed in reincarnation and I am sure that in one of my former lives I was a member of this contrada. And I am an Aries so the Ram is my sign!

• Ravello
It’s on the Amafli Coast , perched high above the sea and we had a memorable lunch in a cool restaurant on a hot day there many years ago. Wagner wrote part of Parsifal in the gardens of an aristocrat high above the sea here. I’ve never been back but would love to go.

• Paestum
There are ruins of Greek temples here, especially one to Neptune – Poseidon – and it smells of wild thyme. We visited it several times when our daughters were little and there are lots of photos of them and us standing, sitting or lying on bits of ruin.. It was part of Graecia Magna, which is why there are Greek temples rather than Roman ones, even though the locals have Italianised the name.

• Old Castellabate above the Gulf of Salerno
A medieval village high up above the sea where in the square an old woman once offered us plums from her basket. It was a magical moment. Old Castellabate looks like a film set for a medieval epic or a part of Assassin’s Creed. Full of cobbled twisting streets, leaning buildings, bits of old fortifications and turrets.  Now it’s a rather expensive wedding venue for those wanting to tie the knot abroad in pretty reliable sunshine and a beautiful setting. 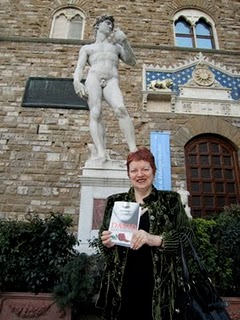