Review: We Can Be Heroes - Catherine Bruton

We Can Be Heroes by Catherine Bruton, published by Egmont on 1st August 2011

Goodreads synopsis:
My dad was killed in the 9/11 attacks in New York. But the stuff in this book isn't about that. It's about the summer my mum went away. The summer that me and Jed and Priti tried to catch a suicide bomber and prevent an honour killing. There's stuff about how we built a tree house and joined the bomb squad; how I found my dad and Jed lost his; and how we both lost our mums then found them again. So it's not really about 9/11 but, then again, none of those things would have happened if it hadn't been for that day. So I guess it's all back to front, sort of... 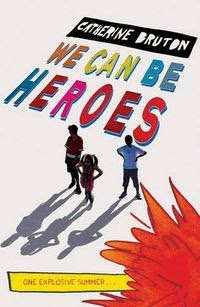 ‘We Can Be Heroes’ is Catherine Bruton’s debut novel.  From the first few pages we learn that the main character Ben, lost his Dad in the 9/11 terrorist attack on the Twin Towers in America.  This sets the tone for a book which doesn’t hold back from exploring and confronting difficult subjects.
Ben is staying with his grandparents for the summer.  The reason for his mother’s absence is hinted at but never explicitly explained.  He soon makes friends with Priti, a young Muslim girl in the neighbourhood and they are joined by his cousin Jed who has also come to stay.  Over the course of the summer, they learn to tackle family issues, grief and bereavement, whilst also learning about the people around them.
One of the main themes of the book is racial intolerance and prejudice.  Some of the characters in the story are very quick to judge others by the way they dress, the colour of their skin or their religion.  This causes disharmony between them and illustrates the irrational way in which people make snap judgements or assessments about each other or discriminate wrongly on the basis of race.
The topic of 9/11 is also predominant throughout.  This is a tough issue to write about but I felt that Catherine Bruton tackled it bravely and in such a way that it was handled sensitively and with great insight.  It wasn’t written about in a gratuitous way but explored the impact and aftermath of this event on the relatives of the people that died that day.
One of my favourite things about the book was the way in which Ben is forever drawing pictures and comics and envisions speech bubbles and weird and wonderful outfits for the people in the story.  There is a short manga comic at the back of the book which is the culmination of Ben’s work and which is awesome!
Although not normally the sort of book I would pick up and read, I found 'We Can Be Heroes' to be an interesting, engaging and thought provoking read which delivers a powerful message about today's society.

Don't forget to come back on Monday 1st August when I'll be hosting a stop on Catherine's first ever blog tour!
Posted by Samantha (A Dream of Books) at 00:00