Crusher by Niall Leonard, published by Doubleday on 13th September 2012

Goodreads synopsis:
To catch a killer, Finn Maguire may have to become one....

Everything changed the day Finn found his father in a pool of blood, bludgeoned to death. His dull, dreary life is turned upside down as he becomes the prime suspect. How can he clear his name and find out who hated his dad enough to kill him?

Facing danger at every turn, uncovering dark family secrets and braving the seedy London underworld, Finn is about to discover that only the people you trust can really hurt you.... 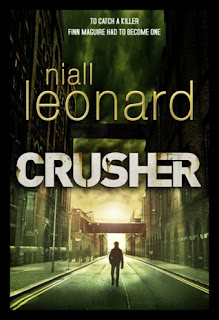 Review:
'Crusher' is a thrilling cat and mouse chase through the streets of London, as Finn Maguire attempts to find out who murdered his father.

When I'm not reading young-adult novels (which isn't often) I do enjoy reading the occasional crime thriller.  One of my favourite authors is Simon Kernick whose books I can devour in a single sitting.  I would put the amazing Niall Leonard in the same category because 'Crusher' (his YA debut) was just as gripping and pulse pounding and gave me sweaty palms from start to finish.  Leonard is the husband of E.L. James who is of course extremely well-known for her bestselling novel 'Fifty Shades of Gray'.  With this title however he establishes himself as a talent to be applauded in his own right because this book is fantastic.

Finn's whole life is turned upside down when he returns home one day to find his father dead, killed at his own kitchen table.  Initially suspected by the police, he decided that he'll clear his name by finding out who the real murderer is.  Finn's had a rough life - his mother abandoned him when he was young, he has a police record for trying to sell drugs and he was never very good at school because of being dyslexic.  He is however pretty street wise, skilled at boxing and most of all determined and that will stand him in good stead for tracking down the man responsible for robbing him of his father.

The story felt very authentic and real, capturing the grittiness of the London back streets, as well as the seedy life of crime which lies behind the veneer of civilised society.  As Finn investigates further into his father's death he becomes more and more embroiled in danger.  There's a very exciting scene which takes place in Finn's house and although I can't reveal too much about it, the words tough and brutal come to mind.

There is a massive twist near the end of the book which I never saw coming!  A trademark of crime novels is usually the red herring and most of the time I tend to guess what these are before they are revealed but not this time.  I literally had no clue at all!  I whipped through the last few pages because the story was so good that I couldn't wait to see how Niall Leonard was going to wrap everything up.

If you enjoy crime novels, then you'll love 'Crusher' which is one of the best young adult novels within this genre I've ever read.
Posted by Samantha (A Dream of Books) at 00:00