Gods and Warriors by Michelle Paver, published by Puffin on 28th August 2012

Goodreads synopsis:
In the turbulent world of the Mediterranean Bronze Age, long before the Greek myths, a boy and a girl battle for survival. With the help of three animal allies - a dolphin, a falcon and a lion cub - they defeat the forces of tyranny and withstand the elemental powers of the gods of land and sea. 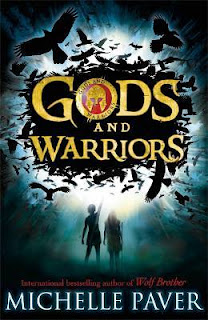 Review:
I'm a huge fan of Michelle Paver and I loved her Chronicles of Ancient Darkness series.  I was therefore massively excited to have an opportunity to review the first book in her brand new series 'Gods and Warriors'.

The story is set during the Bronze Age and features an unlikely hero called Hylas, a twelve year old boy who finds himself being hunted down by rebels at the start of the book.  The beginning is fast paced and incredibly thrilling as Hylas manages to escape but finds himself separated from his younger sister Issi and out in the world on his own.

I thought the setting for the story was wonderful.  Michelle Paver always does such thorough and meticulous research and this pays off with fantastically precise details of Hylas's world.  I found the beliefs of the people of the Bronze Age hugely interesting and enjoyed reading about their connections to the spirits and their rituals in worshipping a greater power.  The descriptions of all the places that Hylas visits in the book are rich and detailed which made them easy to imagine as I was reading.

There are lots of other great characters in the book too, including Pirra who wants to experience freedom but is destined for a marriage she does not want.  Her path eventually crosses with that of Hylas as they each face personal struggles.

One of my favourite things about Paver's books is the way she depicts the relationship between people and animals.  as well as the chapters from Hylas's point of view, there are also the ones seen through the eyes of the dolphin that comes to his rescue.  From the dolphin is conveyed a sense of the vastness and beauty of the ocean and it's hidden depths.  Although animal and boy, the two share a special bond which runs extremely deep.

'Gods and Warriors' is a brilliantly written opening to what promises to be an epic adventure.  Paver is definitely back even better than ever.  This is the first in a five book series, the next of which will be published in 2013, so I'm looking forward immensely to following Hylas on the next stage of his journey.
Posted by Samantha (A Dream of Books) at 00:00