Goodreads synopsis:
After a fatal car accident, her gifted little sister brought her back. Now anything Ember touches dies. And that, well, really blows.

Ember operates on a no-touch policy with all living things--including boys. When Hayden Cromwell shows up, quoting Oscar Wilde and claiming her curse is a gift, she thinks he's a crazed cutie. But when he tells her he can help control it, she's more than interested. There's just one catch: Ember has to trust Hayden's adopted father, a man she's sure has sinister reasons for collecting children whose abilities even weird her out. However, she's willing to do anything to hold her sister's hand again. And hell, she'd also like to be able to kiss Hayden. Who wouldn't?

But when Ember learns the accident that turned her into a freak may not've been an accident at all, she's not sure who to trust. Someone wanted her dead, and the closer she gets to the truth, the closer she is to losing not only her heart, but her life. 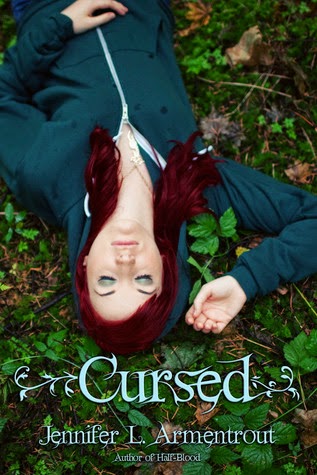 Review:
I'm obsessed with Jennifer L. Armentrout's Lux series and I've recently become addicted to her Covenant books too.  This is one of my main reasons for seeking out this standalone title which sounded fantastic.  I really want to read everything that Armentrout's written because her stories are beyond brilliant.  Sadly, 'Cursed' didn't live up to my passion for Kat and Daemon which is a shame because I was so looking forward to reading it.

The main character Ember has been changed since the accident in which her father was killed.  She's now unable to touch anything without it dying.  While she believes she's cursed, her younger sister Olivia is able to bring things back to life.

I thought that Ember was a great character because she came across as totally selfless.  She always puts her little sister first, even though Olivia is frankly, quite a brat at times.  She's held her family together all on her own and has had to shoulder a lot of responsibility which means that she has had to grow up fast.  There is a love interest in the form of the handsome Hayden, but as Ember can't touch anyone properly it was a very slow building romance.

The plot itself was okay but didn't wow me.  There were a couple of unexpected twists and turns but it didn't consume my every thought like I thought it would and I could easily put this down without obsessing endlessly over what was going to happen next.  I found some elements of the story pretty predictable too and although the second half of the book was better than the first, I was left feeling like I wanted more.

I'm such a big fan of Jennifer L. Armentrout's books that I'm going to pass this one off as just not for me and move onto some of her other titles.  I'm sure this is only a minor blip on my reading radar.