Witch and Wizard by James Patterson with Gabrielle Charbonnet, published by Young Arrow on 8th October 2009

Goodreads synopsis:
The world is changing: the government has seized control of every aspect of society, and now, kids are disappearing. For 15-year-old Wisty and her older brother Whit, life turns upside down when they are torn from their parents one night and slammed into a secret prison for no reason they can comprehend. The New Order, as it is known, is clearly trying to suppress Life, Liberty, and the Pursuit of Being a Normal Teenager. But while trapped in this totalitarian nightmare, Wisty and Whit discover they have incredible powers they'd never dreamed of. Can this newly minted witch and wizard master their skills in time to save themselves, their parents--and maybe the world? 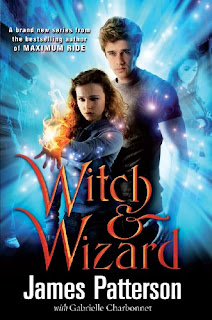 Review:
I've read quite a few of James Patterson's adult novels so I was intrigued to see what his contribution to the young-adult genre was going to be like.  The plot sounded interesting and the cover caught my eye so I gave this one a go.

Patterson (co-authoring this book with Gabrielle Charbonnet) has created a world under the control of a government which rules with an iron fist.  The New Order are intent on locking up children who they believe to be subversive and a challenge to their strict rules and regulations.  When Whit and Wisty are taken away in the middle of the night and locked up in a prison, they don't know why anyone would see them as a threat.  However, as they learn more about their magical abilities, they discover that they are a witch and wizard and might just be the only people that can save the world.

I thought that this book got off to a really strong start.  I enjoyed becoming acquainted with Whit and his feisty sister Wisty and I liked the dual narrative which alternated for each chapter between the siblings.  The opening couple of chapters were gripping and I really enjoyed it.  However, as the story progressed, I found the pace slowed and this wasn't helped by the chapters being so incredibly short that the narration felt quite stilted and abrupt.  The story wasn't given a proper chance to flow which meant that my attention started to wander a bit.

An interesting assortment of characters were introduced throughout, including a female ghost, a talking weazel and a reformed hellhound.  I started to wonder what was going to pop up next!  There were also an array of different worlds to get my head around and at times it seemed somewhat bewildering.

Overall, I loved the opening and enjoyed the first-half of the book but I don't think Patterson was able to sustain a sufficient level of interest throughout the rest of the story.  It picked up again at the end and certainly finished with a cliffhanger ending so even saying all that, I am interested to know what's going to happen to the characters next which means I will be checking out the next book in the series.  This would probably appeal to both male and female readers who enjoy books which feature magical adventures.
Posted by Samantha (A Dream of Books) at 00:00