Goodreads synopsis:
Deep inside the great Oak lies a dying faery realm, bursting with secrets instead of magic. Long ago the faeries mysteriously lost their magic. Robbed of their powers, they have become selfish and dull-witted. Now their numbers are dwindling and their very survival is at stake.

Only one young faery—Knife—is determined to find out where her people's magic has gone and try to get it back. Unlike her sisters, Knife is fierce and independent. She's not afraid of anything—not the vicious crows, the strict Faery Queen, or the fascinating humans living nearby. But when Knife disobeys the Faery Queen and befriends a human named Paul, her quest becomes more dangerous than she realizes. Can Knife trust Paul to help, or has she brought the faeries even closer to the brink of destruction? 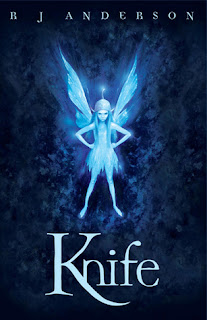 Review:
Faeries!  Magic!  Adventure!  Mystery!  'Knife' by R.J. Anderson combines them all and more.  This was such a delightful and lovely book.  I have to say that when I picked it up I didn't have particularly high expectations, it was just such a pretty shiny cover that I thought I'd give it a try but after the first few chapters I was well and truly hooked.  There are quite a lot of books about faeries out at the moment but this one really stands out because the faeries have such human qualities.  They live hidden from humans in a tree at the end of the garden.  Much of the story is centred around a faerie called Knife, who is curious about the world outside of the tree and who is brave and courageous and inquisitive.

The story reminded me a little bit of the children's classic 'The Borrowers' with the faeries living close to, but not in plain view of the humans and having to hunt and survive in their own small community.  They are vulnerable to many of the things that we wouldn't ever think about and this makes for some really entertaining scenes throughout.  However, Knife is a Gatherer, so her role gives her access to the human world and piques her interest further about the people she observes.

Knife is such a lovely character, along with the other wonderfully unique faeries that she lives with.  She's adventurous and a bit of a rebel but she always does what she believes is right.  I loved the friendship she develops with Paul, a human boy and I can't wait to see how their relationship is going to progress from here onwards.

I didn't guess the ending at all but its set things up nicely for the rest of the books in the series (all of which I'm going to have to track down now!).  The story is wonderfully written, the characters are equally fantastic and the plot kept me glued to the pages.  I only wish it hadn't taken me so long to discover R.J. Anderson's faerie world.
Posted by Samantha (A Dream of Books) at 00:00