Goodreads synopsis:
Celebrating the end of exams with best friend Grace, 17 year-old Alex rescues a swan caught on a wire in the Thames mud and finds an extraordinary bracelet. Through its disturbing and compelling powers, she finds Callum, a soul locked in a half-life of sadness and mystery following a terrible accident, and his persuasive and sinister sister, Catherine. As Alex and Callum grow closer despite the enormous obstacles to their love, the dangers mount until Alex must risk everything to save Grace and Callum must risk everything to save Alex. 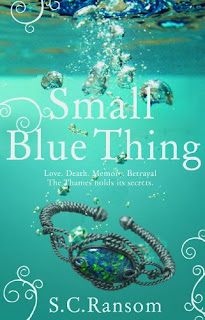 Review:
The beautiful shiny cover attracted me to 'Small Blue Thing' and it just leapt off the shelf and into my shopping basket!  I started it as soon as I got home and found the story so gripping that I finished it the same night.  I can't wait to read the rest of the trilogy now!

The story centres on Alex who finds an exquisitely unique bracelet in the river Thames.  She fishes it out and takes it home but soon discovers that the bracelet has some strange powers.  It enables her to communicate with the river's dead which leads her to the handsome and mysterious Callum.  Callum and Alex fall in love but they cannot be together because Callum is a dirge - destined to live on the other side and feed off peoples' happy memories to keep his own misery at bay.  Alex is determined to find a way in which they can be together properly but when Callum's sister Catherine appears, she has to decide who she can trust and who holds her future happiness in their hands.

I thought that this book was brilliant and a fabulous debut from a British author.  The story was unlike anything else in the paranormal YA genre at the moment and kept me guessing throughout.  I loved the combination of a fascinating mystery, ghostly going-ons, a generous helping of intrigue and a strong romantic thread running throughout.  The storyline was compelling and the ending was most definitely jaw-dropping and has left me in a state of high anticipation for what's going to come next.

My only criticism and it's a very small thing, is that I thought the romance between Callum and Alex developed extremely quickly.  In under 100 pages, they were already declaring their love for each other which seemed a bit fast.  I would have liked to have seen their relationship develop more first but then I guess that's love at first sight!

The second book in the trilogy, 'Perfectly Reflected' is published by Nosy Crow in June 2011.  I'm looking forward to seeing how S.C. Ransom is going to resolve the problem of Callum and Alex's romance and I have a feeling that there are going to be a lot of twists and turns still to come.
Posted by Samantha (A Dream of Books) at 00:00