Review: Don't Judge a Girl by Her Cover - Ally Carter

Don't Judge a Girl by Her Cover by Ally Carter, published by Orchard Books on 3rd March 2011

Goodreads synopsis:
When Cammie "the Chameleon" Morgan visits her roommate Macey in Boston, she thinks she's in for an exciting end to her summer break. After all, she's there to watch Macey's father accept a nomination for vice president of the United States. But when you go to the world's best school (for spies), "exciting" and "deadly" are never far apart. Cammie and Macey soon find themselves trapped in a kidnapper's dangerous plot, with only their espionage skills to save them.

As her junior year begins, Cammie can't shake the memory of what happened in Boston, and even the Gallagher Academy for Exceptional Young Women doesn't feel like the safe haven it once did. Shocking secrets and old flames seem to lurk around every one of the mansion's corners as Cammie and her friends struggle to answer the questions, Who is after Macey? And how can they keep her safe?

Soon Cammie is joining Bex and Liz as Macey's private security team on the campaign trail. The girls must use their spy training at every turn as the stakes are raised, and Cammie gets closer and closer to the shocking truth... 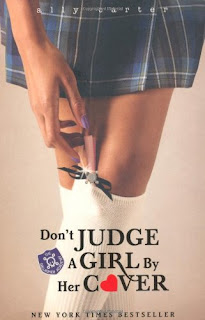 Review:
The Gallagher Girls rock!  Cammie and co are back in the third installment of the teenage spy series, following a group of girls at the Gallagher Academy for Exceptional Young Women.  It's taken me a little while to completely fall head over heels for this series but it's finally happened!  I really enjoyed this book which was a fun and extremely entertaining read.  Although I'm a huge fan of many of the current series about teenage boy spies, it's refreshing to see the girls kicking butt instead.  I wish I'd gone to a school like the Gallagher Academy.

This time around boy troubles are still on the horizon for Cammie but the focus is on her friendships with the other girls and particularly Macey whose life may be in danger while she's out on the campaign trail with her parents.  In typical Cammie fashion, she's soon embroiled in the action and determined to keep her friend safe no matter what.  I love Cammie - she's a great character to base the series around.  She's always hurtling head-first into dangerous situations but she's incredibly loyal and always puts her friends first.

Zach, the boy that she was involved with in the last book, appears mid-way through the book.  He seems to keep getting more and more mysterious and I'm looking forward to finding out what secrets he's hiding.  I would have liked to have seen more of him but on the other hand I think it was good that their romance took a backseat while the focus of the story was on Macey and Cammie.  I'm sure there's plenty more Zach to come.

A little more about Cammie's family history is laid bare and her Aunt Abby is a new character in the story.  It was interesting seeing a Gallagher girl actually out there in the world doing such a high powered job.  She came across as having quite a mercurial personality and I wasn't sure whether or not she was entirely on the level but I thought she was a good addition to the series.  I hope she appears again in later installments.

This is such a fun series and I'm enjoying it more and more with each new book.  The characters are hugely appealing, the plots are always action packed and running high on adrenaline and I'm finding myself really getting hooked on them now.  'Only the Good Spy Young' is published by Orchard Books on 5th May 2011 and I for one can't wait!
Posted by Samantha (A Dream of Books) at 11:57