The Shadowing: Hunted by Adam Slater, published by Egmont on 2nd May 2011

Goodreads synopsis:
The girl lies by the canal, her face turned upwards like a stargazer. But she will never see the stars again. Her eyes have been torn out. The rain fills the empty sockets until they brim over, spilling bloody tears down her cold, white cheeks. Once every century, the boundary between the demon Netherworld and the human world weakens. Legions of creatures gather, preparing to cross over, to bring death and destruction. This time is called The Shadowing.

Callum has always known that there is something beyond the mortal world - he can see ghosts. Lately, he's started to have horrific visions of children murdered by some terrible, unseen creature. And then the visions start to come true - and Callum realises he is being hunted too. But Callum must stay alive. He is bound by a dark destiny, and must stand against the demon forces that threaten our world forever. For it is nearly time. The Shadowing is coming... 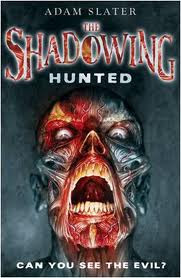 Review:
'The Shadowing' is chock-full of thrills and packed with enough creepy supernatural goings-on to keep you up all night. You'll most definitely have to read this book with the lights on!

I must admit that I was a bit apprehensive about reading this to begin with, as I'm not usually a fan of the horror genre. It's certainly not something that I would normally have picked for myself. It has the scariest cover ever! However, I'm so glad that I was sent a copy of this and gave it a go because it's a stellar opening to the series and has left me dying for more. I got sucked into the story and found it incredibly difficult to put it down as the suspense was unbearable. I couldn't go to bed until I'd reached the end.

The story centres around Callum Scott, a young boy who has the ability to see ghosts and who starts having strange premonitions which warn him about events to come. He lives with his Gran who is dismissive of anything to do with magic or the supernatural. When children start getting murdered, Callum may be the only one that can stop the strange creature responsible. But how can one boy stop a terrible evil?

Callum is a great central character as he seems so normal but has an incredible ability which may be the only thing that can save the human world from what lies on the other side. A little is told about Callum's family history but I feel like there's much more to come. I suspect a big secret could end up being revealed.

What I loved about 'The Shadowing' was that it was such a fast-paced and exciting read. Each chapter was full of thrills and spills and interesting plot twists. I had no idea what was coming next and spent most of the time on the edge of my seat. It had a stunning opening which really set the tone for the rest of the book and a fantastic ending which was jaw-droppingly brilliant.

This book will appeal hugely to a male audience who are looking for the next big thing in this genre but that's not to say that females won't love it too. I did! There are a couple of bits which made me a bit squeamish as Slater doesn't hold back from the gore-factor, so I probably wouldn't recommend this to very young readers but those who are slightly older will lap this up.

I'm eagerly anticipating getting my hands on 'The Shadowing: Skinned' which is the next book in the series. Who knows what's coming next!
Posted by Samantha (A Dream of Books) at 00:00