Only the Good Spy Young by Ally Carter, published by Orchard Books on 5th May 2011

Goodreads synopsis:
When Cammie Morgan enrolled at the Gallagher Academy, she knew she was preparing for the dangerous life of a spy. What she didn’t know was that the serious, real-life danger would start during her junior year of high school. But that’s exactly what happened two months ago when she faced off against an ancient terrorist organization dead set on kidnapping her.

Now the danger follows her everywhere and even Cammie “The Chameleon” can’t hide. When a terrifying encounter in London reveals that one of her most-trusted allies is actually a rogue double-agent Cammie no longer knows if she can trust her classmates, her teachers—or even her own heart. 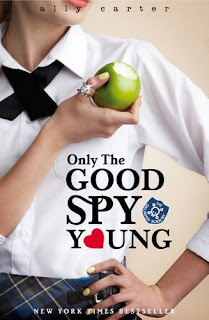 Review:
This is the fourth installment of the Gallagher Girls series and the most explosive and action-packed so far.  It was so gripping that I read it in one evening because I couldn't go to bed until I knew how the story was going to end.  In typical Ally Carter fashion it left me desperately wanting more but I've heard that there won't be a new Gallagher Girls book now until 2012, which is far too long to have to wait!

If I could describe the series in one word it would be fun.  The books are absolute pure entertainment and always provide such an enjoyable read that they're a bit like chocolate - a sweet treat that you can't get enough of!

The story starts with Cammie on winter break with Bex and her parents.  Closely guarded after the events of the preceding book 'You Can't Tell a Girl By Her Cover', she believes she's safe but then her whole world is turned upside down and she begins to question everything that she thought she knew.  With the help of best friends Bex, Macey and Liz, she's soon on a mission to uncover the truth about the mysterious Circle of Cavan but she may not like what she discovers.

The Gallagher Girls books are littered with kick-ass characters.  Cammie is like a 21st century Nancy Drew but with skills and abilities that Nancy could only dream about.  Bex and co never fail to let me down with their loyalty and devotion to keeping Cammie safe, plus there's a new teacher on the scene who may or may not be on the same side as the good guys.  The elusive Zach is also back and some incredible secrets are spilled about who he really is.

'Only the Good Spy Young' is brimming with adventure and excitement and there are some thrilling revelations that there's no way you'll see coming.  Although answers are provided to plenty of the questions that have been bubbling away throughout the series, Ally Carter has also thrown in several more curveballs which take the books to a whole new level.  This installment provided adventure, mystery and romance in abundance and has completely solidified my love for the Gallagher Girls.