Goodreads synopsis:
Royal...Cat's Cradle.In which Cat Royal spins a tale about the search for her family, weaving in friends and foes, old and new. Her journey takes her from riotous London to a revolutionary cotton mill on the River Clyde in Scotland. And a mysterious newcomer is introduced...So take your seats, ladies and gentlemen: the Industrial Age has arrived. 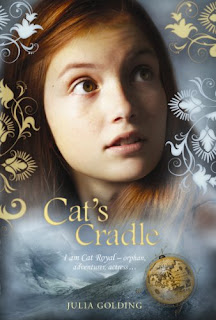 Review:
This is the sixth book in the series about Cat Royal, self-professed orphan, adventurer and actress.  I haven't actually read any of the preceding books but it didn't take me long to get acquainted with the all the characters.  There was also a handy who's who guide in the front which I consulted a couple of times and was a big help.  The only thing I would have liked to have known (and I assume this is mentioned at the start of the series) is how old Cat actually is.  I couldn't quite work this out - the cover girl looks about 13 which is much younger than I pictured Cat being, as she often seems to be off on an adventure of her own and I would have thought she was closer to 16 or 17.

'Cat's Cradle' is set in London in 1792, as Cat arrives home from her escapades in the Caribbean.  No sooner have her feet touched solid ground than she's off again, this time to Scotland, to try to uncover long-buried family secrets.  The story follows her attempts to discover the identity of her mother and to determine if she actually does have a family after all - an orphan no more.

This was an enjoyable story with an engaging and unconventional heroine, who's feisty and doesn't conform to what's expected of a conventional young lady.  She speaks her mind and isn't afraid to stick to her guns even when those around her might question her actions.  This is refreshing and is part of what makes Cat such a brilliant main character.  She can often be found with her close friend Syd and his London gang, but in this installment she is trying to keep some distance between herself and Syd who harbours romantic feelings towards her.

There's some interesting new characters as well, such as Bridget, an Irish girl who she meets and takes under her wing and who joins her on her journey to Scotland.

I love historical fiction and liked the way in which Julia Golding wonderfully evokes the sights and sounds first of eighteenth century London and then Scotland, through both the landscapes and the dialects of the characters.  I felt like I was transported back in time to join Cat on her adventure!

The Cat Royal books are hugely popular with a young teen audience but I think would also appeal to anyone that likes beautifully written historical fiction that's engaging and entertaining, as well as touching on more serious issues such as social equality.   I'm now going to go and read the first five books in the series to see where Cat's story began!

You can find out more about Julia Golding and the Cat Royal books at: http://juliagolding.co.uk
Posted by Samantha (A Dream of Books) at 11:35