Goodreads synopsis:
Three years ago, Alison disappeared after a slumber party, not to be seen since. Her friends at the elite Pennsylvania school mourned her, but they also breathed secret sighs of relief. Each of them guarded a secret that only Alison had known. Now they have other dirty little secrets, secrets that could sink them in their gossip-hungry world. When each of them begins receiving anonymous emails and text messages, panic sets in. Are they being betrayed by some one in their circle? Worse yet: Is Alison back? 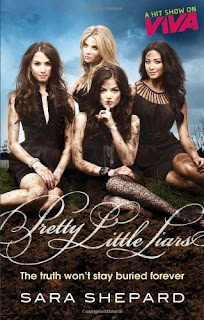 Review:
The 'Pretty Little Liars' series is one that I've been meaning to read for a while now.  With the launch of the TV series in the UK, I thought that it was about time I caught up with the books.  The story is basically about five best-friends who do everything together until one of them disappears and the friendship between the other girls falls apart.  An investigation is launched into what happened to Alison but no one knows how or why she disappeared.  Fast-forward three years and the girls are reunited in Rosewood.  When they start receiving mysterious text messages, emails and letters from someone calling themselves 'A', they begin to wonder if someone knows what really happened to Alison after all.

This was a fantastic start to what I suspect is going to be an addictive series.  The story is fast-paced and exciting and although on the surface it may first appear to be no more than a shallow story about a group of glamorous girls, it's actually pretty gritty, with everything from eating disorders to shoplifting to issues about sexual identity being discussed.  It's also really creepy and puzzling as the identity of 'A' remains a secret both to the girls and to the reader.  I tried puzzling it out but frankly I don't have a clue who it is yet!

Each chapter presents an alternative viewpoint from each of the girls and this helps to establish their very unique characters, feelings and motivations.  My favourite characters were Spencer and Aria and I'm loving both of their story lines so far.  All of the girls present very particular images, from fun-loving party girl, to school swot, to sports star, to arty culture fan but underneath they seem to be another person entirely with deep, dark hidden secrets which they'd go to any lengths to protect.

This book reminded me a little bit of Kate Brian's Private series and if you love gossipy, back-stabbing, scheming fun then you'll definitely enjoy 'Pretty Little Liars'.  The ending is absolutely tantalising and has left me desperate for more.  Sara Shepard is giving very few clues away which only makes me want to read the next book even more.

I'm looking forward to the scandal and intrigue unravelling further in future installments of the series which I have lined up and waiting for me to read next.  Now, I just need to resist peeking at the end to see 'who did it'!