Waterfall by Lauren Kate, published by Doubleday on 6th November 2014

Goodreads synopsis:
Eureka's tears have flooded the earth and now Atlantis is rising, along with its evil king, Atlas. Eureka is the only one who can stop him – but first she must learn how to fight.

She travels across the ocean with Ander to try and make sense of the dark world her sorrow has created. But dark secrets are hidden in the depths – will she be strong enough to defeat Atlas, or is her broken heart just what he needs to power his rising kingdom?

Eureka has the chance to save the world. But she'll have to give up on everything – even love . . 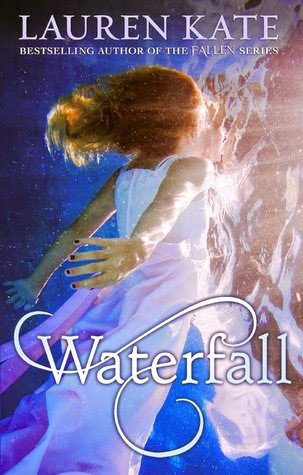 Review:
This is the second book in the series following last year's opening instalment 'Teardrop'.  I have to say that I didn't enjoy this one as much as the first book.  I got quite confused about what was going on, particularly in the second half of the story and I found the pace very slow.  I put this one down and picked it up again several times before I actually managed to finish the whole thing.  I am disappointed because I was so looking forward to reading it and had such high hopes about it that I felt very flat by the time I got to the final page.

Eureka has caused the earth to flood and now has to deal with the consequences.  People have died, those closest to her are in danger and her love for Anders and best friend Brooks lies in the balance.  As Atlantis begins to rise and the evil Atlas threatens everything she holds dear, Eureka begins to discover some difficult truths about her past and future.

I thought that at times, Eureka seemed like a very different character in 'Waterfall'.  She's been through so much and learnt so much about herself and I understand that this would change a person but I didn't always recognise the person that she ended up becoming.  She was tougher but her human side was less evident.  I also didn't feel the romance between Eureka and Anders this time around, even though I thought this was going to be developed in a really positive way.  The bond between them is still strong but I didn't believe in it quite as much, so I wasn't as connected with them as a couple.

I do think that Lauren Kate writes beautifully and I always adore the mythological aspects of her stories.  I enjoyed finding out more about the Seedbearers and the world of Atlantis but this wasn't enough to keep my attention firmly rooted on the characters' struggles.

I will be continuing with this series because I think that Lauren Kate may still knock it out of the park with a killer conclusion.
Posted by Samantha (A Dream of Books) at 00:00