Searching For Perfect by Jennifer Probst, published by  Pocket Books on 29th April 2014

Kennedy vows to work her magic and transform this hot mess in a lab coat with a disastrous relationship track record into the most wanted man on the Verily dating scene. If only she could turn the wand on herself . . . Though she radiates confidence and sex appeal, Kennedy harbors deep-seated insecurities from a tormented past and lifelong struggle with weight issues. When she realizes she and Ned are cut from the same cloth and might be perfect together, can Kennedy learn to let her heart lead the way? Or will her fears sentence her to the sidelines as Ned finds love with someone else? 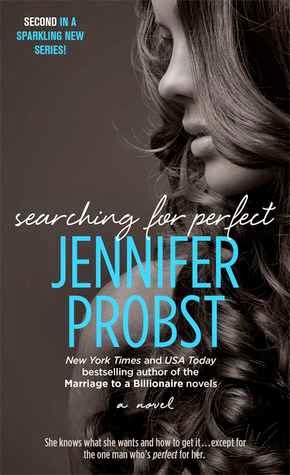 Review:
Jennifer Probst is one of my favourite new authors and this series is on my auto-buy list.  I loved the previous book 'Searching for Someday' and I had high expectations for this follow-up which I'm extremely happy to say was just as wonderful.

This time it's the turn of Kennedy to find her happy ever after, although she has a lot of personal issues and insecurities to overcome first.  Kennedy is the makeover queen and when she meets Ned, hopeless in love and desperately needing a change of image, she determines that he will be her new project.  But as she begins to transform his outward appearance, she finds herself beginning to fall in love with the all-new Ned.

Kennedy or Ken, as she's known, has rebuilt her life, after being bullied mercilessly as a teenager because of her weight.  She is now a successful career woman, co-owning a matchmaking business with her two good friends, but when it comes to love she still has a lot to learn.  I liked Ken because she isn't perfect, she has her flaws just like everyone else but she works day by day to overcome the insecurity she feels about her body.  She has worked hard to become who she is today and I admired that.  I enjoyed watching Ken make over Ned, who she renames Nate and turn him into one hot scientist.  Although he's not confident socially with women, he wants to learn and he wants to find his perfect lady.  His willingness to do whatever it takes to improve his image and become more outgoing with women was extremely endearing.

I wanted Ken and Nate to be together from the beginning.  They have the same interests and they've both experienced being put down by other people which makes them more understanding of each other.

'Searching for Perfect' was a brilliant read.  Sweet, sexy and romantic, I never wanted it to end.  I'm dying to read the next in the series now, 'Searching for Beautiful' which focuses on Wolfe and Genevieve.
Posted by Samantha (A Dream of Books) at 00:00